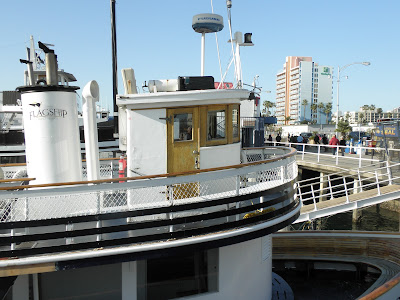 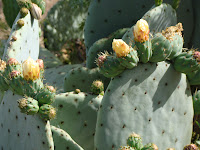 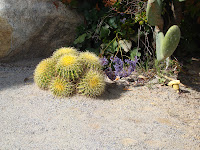 We left our hearts
in San Diego
with harbor blue
and birds to see.

Sights abound
in San Diego
some for you
and some for me.

When we come
back
to you,
San Diego,
Your
golden sun
will set again. 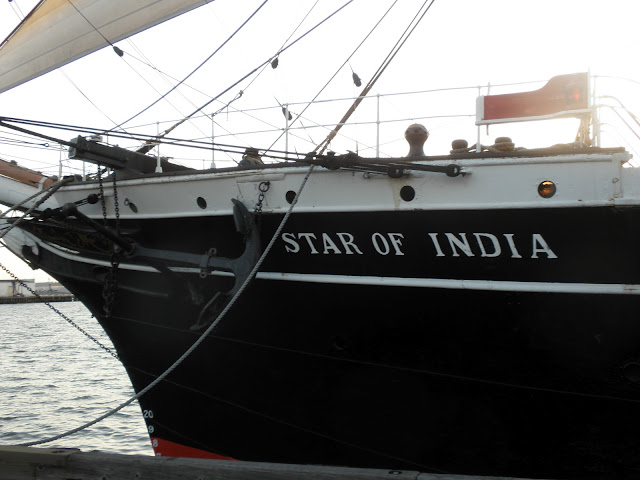 Today at the writers' group Imaginary Garden with Real Toads, Kerry introduced "Steampunk" and, of course, I had never heard of such a thing, being somewhat old and more than somewhat decrepit.
Abandoned by my parents here in the vortex of old age, I have discovered my once-wild imagination to be gone with the winds of time and tide, so I can only write about the things happening around me in the dry and dreary present.

Today, for the Steampunk prompt, I am introducing a minor flaw in the otherwise sterling character of my housemate and lifemate, my intrepid photographer and present (until he reads this) husband, Richard Schear. Unlike myownself, he has no middle name, nor nary a middle initial, so I have taken it upon my aforementioned self to give him one, and it shall be X for the purpose of my first Steampunk poem, presented below for your delectation:

Professor Richard X. (for ’xtr’ordinary) Schear
is to me a person very, very dear,
but his interplanetary-wide reknown
is based upon a principle he found:
No matter how few do in a place reside,
it’s best to buy the food as for a pride
of lions, or a dozen men with brides
because the price of an individual item
is less than if he only buys just one of ’em. 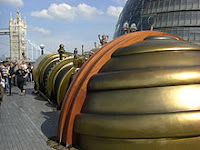 High-falutin’ scientific principles, you see,
went into the making of this theory,
so my Professor Schear has now succeeded
in convincing people to buy more than needed.
His greatest influence, he found, was lending
his theory to Canadian feds whose spending
is far more than any in the private sector
and our PM has the morals of Hannibal Lector. 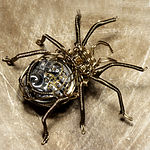 “We need 80 fighter jets,” he says to Dick.
“If you buy more, I’ll get ’em for you quick,”
the prof replies, though it’s a governmental lie,
but in the nation’s heart, these things pass by.
“Extraordinary!” the man in the street exclaims. 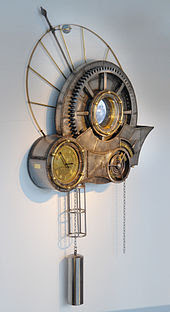 “You’re right, but this is how I gained my fame,
by living up to the X, my middle name,
and by playing the interplanetary game.
Metallic brass steam-engines are just tame
compared with ersatz dirigibles of iron
and no one has caught on when hearing me lyin’.
The juggernaut of government just rolls on,
and last week I sold them all automatons
to occupy their seats in Government House
while each is somewhere else, being a louse.
I pocket all their federal cash like clockwork
and I can tell you it's easier than dock work.”
Photos from Wikipedia
Posted by Kay L. Davies at 4:04 PM 9 comments:

Very busy with the kitchen renovation and other concerns, so I didn't even post my Mad Kane limerick to Open Link Monday at the writers' group Imaginary Garden with Real Toads yesterday.

However, I did write this one (changed from an old first line of Madeleine’s).

A senior, I still like to date
But it is unlikely I’ll mate
I’m still doing fine
But I’m ninety-nine
And I certainly won’t procreate.
By Kay Davies
And this week, I couldn’t think of anything, but my husband did. Then Madeleine sent him a message inviting him back another time.
A fellow was planning to wed
A girl who was all in his head
He thought, “No big deal
if she is unreal,
At least she won’t nag me in bed.”
By Richard Schear
Isn't he just too, too bad? Well, Madeleine thought he was okay as a limerickist, but didn't comment on his husbandly qualities.
Posted by Kay L. Davies at 6:31 PM 7 comments:

ABC Wednesday: T is for traffic

These photos are not of the completed kitchen. Some things remain to be done, like baseboards, toe-kicks, some work on the backsplash, and some painting. However, this is our world here at our house this Tuesday. 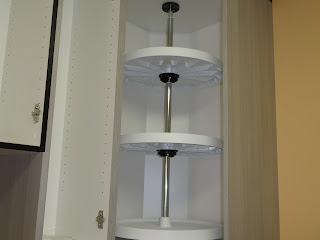 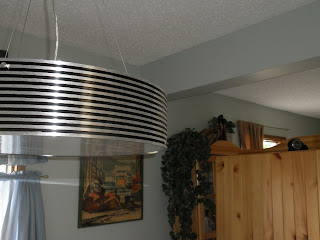 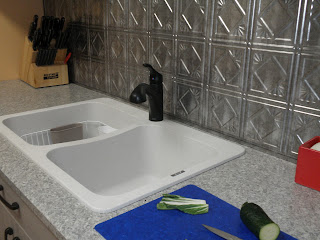 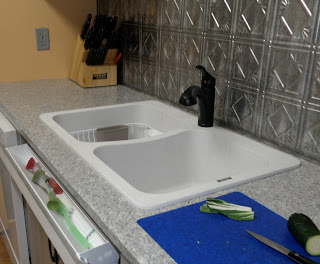 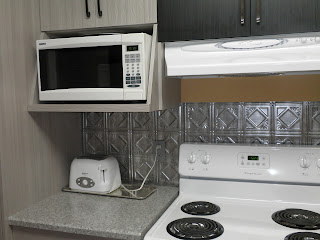 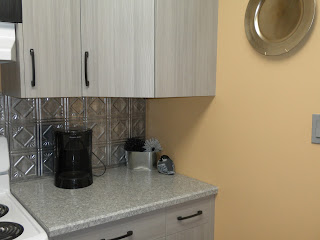 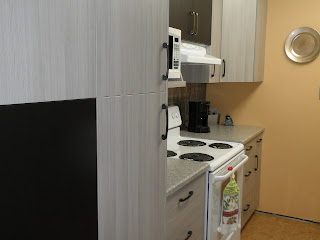 Posted for
Our World Tuesday
Posted by Kay L. Davies at 10:33 AM 15 comments:

Each week, at Grandma's Goulash, a photo is posted to inspire writer-bloggers to write a short story of 140 words or less, or a short-short story of 140 characters or less, including spaces and punctuation.
There is also a word of the week. This time it is privilege.
Here is the photo supplied as a prompt, along with my submission of 100 characters.

Everyone thought it was a privilege, attending a retreat in an old but very updated Spanish mission.
Posted for Succinctly Yours
Posted by Kay L. Davies at 8:57 PM 13 comments:

Email ThisBlogThis!Share to TwitterShare to FacebookShare to Pinterest
Labels: Grandma's Goulash, Succinctly Yours, word of the week

For Real Toads: Daryl and Zagar

Poets Forever
Daryl and Zagar
together* create
art that is colorful,
art that is great.
She with her camera
and he with his tiles
make nothing pedestrian
but pedestrian smiles.
Four thousand poets,
and Zagar, make art
“in the center of
the real world”
and that’s just to start.
On his art goes again,
up town and down
and then all around.
Daryl’s photos,
taken with care,
make me feel
I'm really there.
*but separately and individually
The visiting artist for the Sunday challenge at Imaginary Garden with Real Toads is New York photographer Daryl Edelstein, with her photos of some of the many pieces muralist Isaiah Zagar has created in his home city of Philadelphia, especially in South Street. His work can be seen worldwide as well.
Our challenge is to write about these two very different but equally talented artists, the man who creates murals, and the woman who sees photo opportunities and shares them with us on her popular blog.
Thanks, Daryl!
Posted by Kay L. Davies at 6:48 PM 7 comments:

Even though we both picked her up from SOS Pet Rescue, and brought her home in the car, Lindy loves her daddy best. He took this beautiful photo of her last weekend at our friend Jeff's birthday party. She met three beautiful show-dogs there, and made friends with the young one first, then the middle one. The eldest of the three wasn't interested in Lindy, but she didn't care. There were lots of friendly people there, especially little Emma and her older brother Dominic. 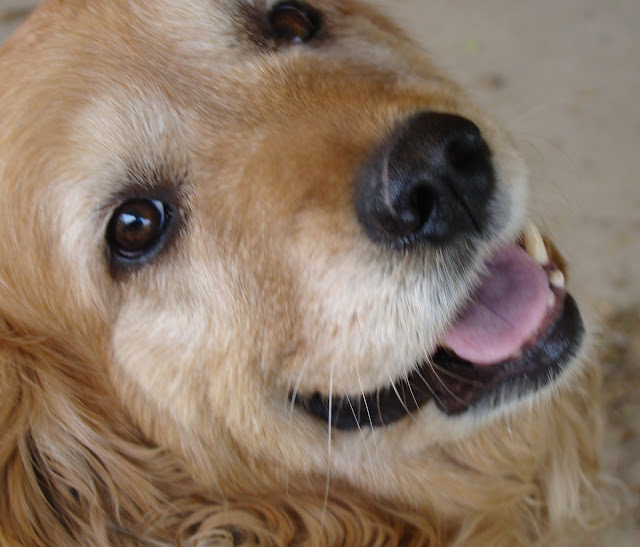 Posted for Pet Pride
hosted by Lindy's friend Bozo and his family at their Pets Forever blog.

Fireblossom's prompt for the writers' group Imaginary Garden with Real Toads yesterday was "stress" and she didn't mean "accentuate the first syllable" either.
For Fireblossom Friday, she wanted us to write about what stresses us out— and me just coming through a kitchen renovation— according to experts the biggest stressor a marriage can endure. Dick was happily oblivious. I, however, was so stressed I couldn't possibly write a poem about it.
Today, I was halfway through reading an article in Mclean's Magazine when I realized it might make a fun poem.

everyone is getting lax
but saying “I am stressed to the max”
can’t plan your wedding?
can’t plant your bedding plants?
hire someone to do it!
don’t know how to do-it-yourself,
can’t put together an Ikea shelf?

look in the paper
or else look online
a do-it-for-you-er
you’re sure to find
too stressed to find words
to propose to your lover?
have a ghost writer
hover above her
clean up your kitchen, 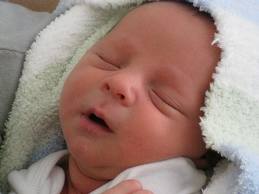 mop up your floors?
too stressed for any
old-fashioned chores?
can’t bake a cookie?
just call your bookie
and he’ll find someone
who isn’t a rookie
can’t feed your baby?
not even maybe?
wet nurses are coming
back into style
can’t be a hockey mom,

too stressed to think?
rent someone to take
your kid to the rink!
too tired to cheer him on?
what a phenomenon!
hire a cheering squad
and win your kid’s applause
no good deed’s too trivial—
hire someone convivial
to make your glum child smile
for the photographer at school 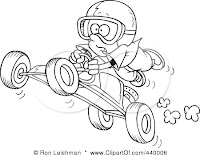 for baking were ready
flour and sugar, eggs and good flavor
baking for all the go-karters to savor
but gone are the days
of the fifties and sixes
in this millennium
stress needs easy fixes
Posted by Kay L. Davies at 6:22 PM 8 comments:

Posted for
Camera Critters
hosted by Misty Dawn. Thanks, Misty!
Posted by Kay L. Davies at 8:29 AM 11 comments:

SkyWatch Friday: skies from all over