I had much to say about my trip from Alberta to The Wet Coast this past weekend, so I did a great deal of writing yesterday, preparatory to Our World Tuesday, but I wasn't really satisfied with the my results.
Yes, while I was in BC, I visited family and friends.
It was wonderful to see my family: my young brother, my sister-in-law, my nieces, grandniece, cousins and, in particular, my aunt.
I have described my aunt elsewhere as 'indomitable' and she undoubtedly is.

Now, however, for Our World Tuesday, I think I'd like to share something else from that visit to British Columbia...music as sung by a barbershop chorus.

At a gathering in memory of my friend Jim, whom I had known from the time he was a toddler and I was his babysitter, I enjoyed hearing some beautiful, beautiful music.
Jim was a dedicated member of a men's barbershop chorus, singing a capella music in the barbershop style.
Several of his friends from the chorus joined his family and many friends at his house to help celebrate his amazing life.
Some of you might never have heard of a barbershop chorus, but most of my generation will remember men's pre-rock'n'roll barbershop quartets such as the Ames Brothers (1948-1963), and women's quartets such as the Chordettes, also 1948-1963. 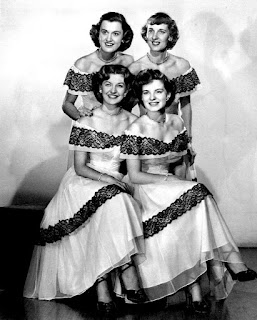 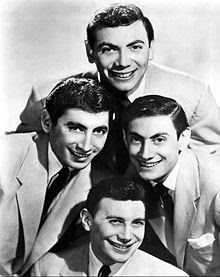 Sharing this week with another indomitable woman, Lady Fi, and her memorable meme
Our World Tuesday

"Only the good die young"

In the past year, two people I consider too young have died. Now I am pensive: I'm sad when I think of their deaths but, more than that, I am grateful for their lives.
One was my youngest cousin, whose life would have been beyond difficult if not for the care and dedication of my aunt. She and my uncle raised three sons, one with lifelong health problems, while she continued to teach school, which she did for 50 years!
Indomitable is the word that comes to mind when I think of my aunt.
I'm hoping to see her this weekend, to have her join me on a dinner date with her middle son and his wife in Vancouver, BC.

However, I am now flying to the west coast to attend a memorial service for another young man, one I knew since he was a little boy and I was his babysitter in my home town, White Rock, BC.


Every now and then I find myself thinking:
It isn't right. It isn't fair!
I am the eldest cousin!
I am the former babysitter!

Even though I don't like it, that is the way of the world.

Shane and Jim — I still love you.


Posting these memories for

Last week, I mentioned my ineptitude with my new computer.
I'm learning. I'm sure I'm learning how to use it. Okay, yes, with some help from my much-more tech-savvy husband.
I used to be on the cutting edge of computerized typesetting, you know, but I retired from the printing trade before technology reached the heights it has since attained in the 21st century, and I was good at it. I really was. I'd even been known to be 'stolen' from one employer by another because of my skills.
Sigh.
Long ago and far away, folks. Now I have no skills. I have to risk annoying annoying my husband by asking  for help, so many times that he has come to regard me as a slightly underdeveloped child. 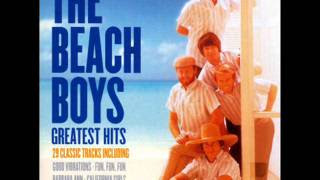 However, with his help: my triumph of the day — I am playing music from my youth via something called The Nostalgia Machine. (http://thenostalgiamachine.com/)


To change the subject completely now, I've found something new (new to me, don't forget that part, it might not be new to everyone) for my diet-controlled diabetes.
I found it accidentally, in the drugstore, while waiting to get my flu shot.
There were two kinds of 'naturally sugar free' mints on the counter, labelled 'no aspartame' and 'naturally flavored' so I had to try them, one little box of 'Spicy Cinnamon' and one of 'Pomegranate' — how could I resist pomegranate mints? Yum.
Yes, yum!
I decided to check out some of the listed ingredients on Wikipedia.
"Sorbitol (/ˈsɔːrbɪˌtɒl/), less commonly known as glucitol (/ˈɡluːsɪˌtɒl/), is a sugar alcohol with a sweet taste which the human body metabolizes slowly."

Okay, we all know 'sugar alcohol' doesn't mean booze, and of course 'sweet taste' is what I was after.
So far, so good, and 'metabolizes slowly' is good, too, right?
But who knows what 'isomer of mannitol' means?  Not I.
But it also says the isomer of mannitol is 'found in nature, for example in apples, pears, peaches, and prunes.'

Yum. Now that sounds better, except maybe the prunes.

And then there are the illustrations offered by Wikimedia:

a red, white, and black one, which is kinda cute,
and also this next one: which no one in this household understands...

It is "all Greek to me" as my mother would have said.
Wait!
That's it! I've turned into my mother. I instinctively know a great many useful things: I can cook without recipes, for instance. Without recipes and without pre-prepared food.
I know which things go with which, etc., although I don't know how to serve pomegranate.
Sigh again.
Now, can someone tell me why my computer screen keeps disappearing, only to reappear with something else on it? Or why it scrolls up and down whenever it feels like it?

Technology & me...or should I go retro?

I have a new computer. It's a little smaller than the previous one but the screen is right at eye level where I like it, and the keyboard is very comfortable...strange, because it looks  just like the old keyboard, but seems to work better. Maybe it isn't full of dust and junk. That could explain it. And it is very well-behaved. It sits right where I put it down, and doesn't wander around the desk like the old one did.

Now, of course, having a bright new screen and a comfortable new keyboard, I have grand illusions of The Great Canadian Novel! Those grand illusions seem to hit me every time my sore hands work properly and in sync with my brain. When the pain returns, I know I'll never write it.

Okay, so that lasts five or ten minutes, and then I discover I can't scroll down the page.  This happened while I was on Facebook earlier, and it carried over here into Blogger. My techie guy is at the school down the street playing pickleball, but he spent all of last afternoon and evening fussing with this new machine of mine, so I hate to ask him to help me again. I don't even know what to call the scrolling-down bar. 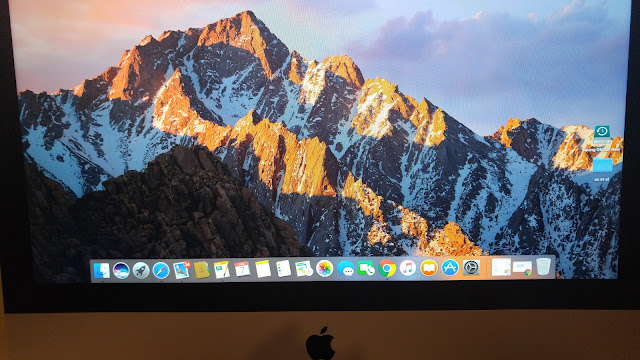 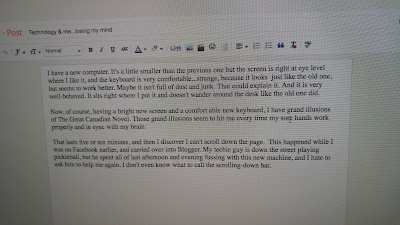 And, once again, here I am. Techie husband has found the slide-down-the side tool, and has also walked the dog. One would suppose it would behoove me to prepare dinner and, of course, one would suppose correctly...providing I have enough strength for cooking after wrestling with an iMac all afternoon.

I'm still having the occasional argy-bargy with the slider-downer on the righthand side here, but all in all it did turn into a reasonably good afternoon. Said techie, to whom I referred above, has come home, and has taken our little dog for one of the long, long walks she loves. The temperature was above freezing this afternoon, which was a nice break from the recent deep-deep-freezes, making their walk fairly comfortable.

Now I'm debating...do I make dinner, or do I continue attempting to master this new and supposedly wonderful machine? I don't know. (Sometimes I wish I'd spent all my new-computer money on a '56 Chevy with a 409. Sigh. But I don't drive any more. Sigh again.)

Canadian tartans seem to be or not to be 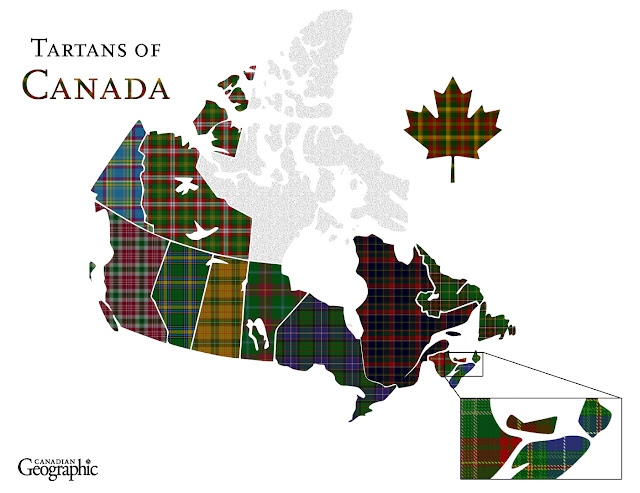 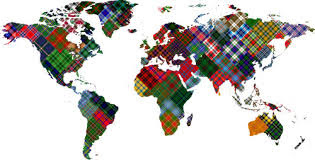 A couple of weeks ago, pursuing an interest in my family tartans, I began researching tartans in general. It seems almost every country, city, town, and spot on the globe has its own tartan these days, so I will have to limit these posts, for fear of alienating whatever followers I might have.
Sharing with Lady Fi's marvellous meme:
Our World Tuesday and wishing everyone at Our World a very happy and prosperous 2018!


Now, rightly or wrongly, my research has come up with these Canadian tartans. 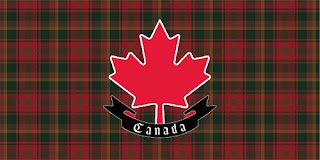 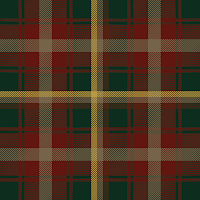 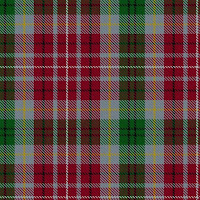 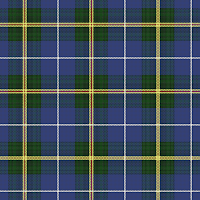 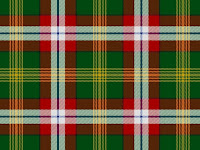 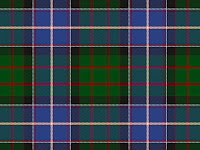 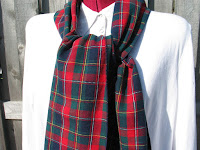 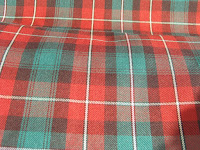 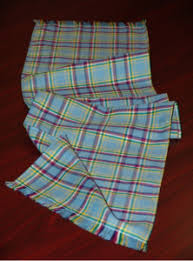 The official tartan for the Canadian Territory of Nunavut (above right) has not, as far as my research can discern, been officially declared. (See top, map of Canada, with grey area in the north.) Nunavut's choice seems to come down to the difference between the territory's dress tartan and its hunting tartan. Given that hunting is essential in the lives of the people of Nunavut, I'm leaning toward the slightly more muted hunting tartan, below right. 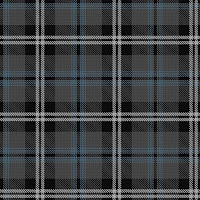