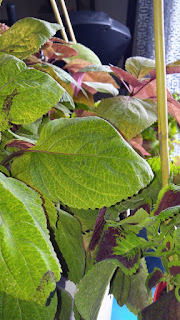 Just last month, here on my blog, I featured photos of the three large coleus plants I called "my girls" all summer, and brought indoors to overwinter because I couldn't bear to see them die.
Now I have to admit that my girls brought with them a whole herd of tiny flying insects, gnats or fruit flies or something.
Sigh.

I don't really know what to do.
I'd like to think I can get rid of the little "buggers" but I don't really believe I can. And we aren't always home to look after houseplants, anyway, vagabonds that we are.
So I'm afraid I'll have to put them outside in the windy wintry weather.
Part of me wants to advertise them "free to good home" but that would just mean passing on the infestation of insects to someone else.
And the bug problem really is getting to be awful. 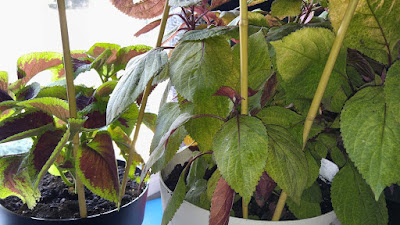 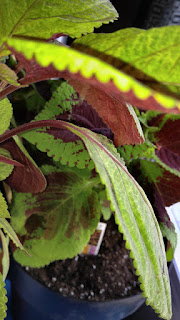 So here they are again, my beautiful girls, just before I say goodbye to them.
(Or until I find a solution to the problem. No, Kay. Down, girl. There really is no solution. Admit it and move on.)

Long long ago, but never forgotten

I was watering my coleus plants when I noticed a couple of leaves that needed to be pinched off. As I was doing that, I unintentionally poured some of the water into a box on the floor beside the plant table.
When I pulled things out so I could dry them, one item turned out to be a photo of a couple who were my parents' friends, and my friends, since the 1960s. They had left Alberta and moved to British Columbia where more jobs were available. 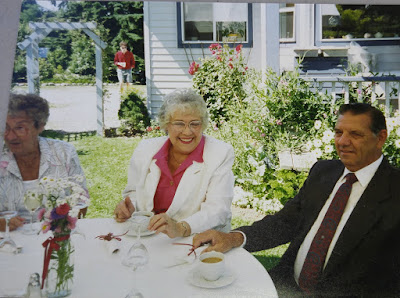 This is a photo I took, of the picture I found, which had been taken at my young brother Rob's wedding. It shows Ralph on the right, Petie in the centre, and on the left is 'Auntie' Edith, whom you can barely see. She and her husband George were family friends who knew me since I was wee tiny or, more likely, since I was born.

I babysat Petie and Ralph's kids until they no longer needed a babysitter, and Ralph actually gave me a ride from White Rock, in the suburbs, into the city of Vancouver for my very first job hunt.
He dropped me off near Playland, and told me to wait because a downtown bus would be along soon. Terrified that I might take the wrong bus, I walked instead.
I walked, in my mother's shoes, for one hour and sixteen minutes, according to Google Maps. 6.1 kilometres, or 3.8 miles.
I walked, in my best neat and tidy dress (and don't forget Mom's shoes, through some pretty shady neighbourhoods, and was never accosted at all. Instead, people smiled and said hello.

I walked to the offices of the Vancouver Province newspaper, where they said they had no openings, so I walked the short distance (maybe a block or a block and a bit) to the offices of the other daily paper, the Vancouver Sun.
I took the elevator to the newsroom, where they directed me to the personnel office, and I got a job...working in the newsroom. It wasn't a glamorous job, I was just a copy-runner, but I was happy as a clam, except for that annoying young woman in the newspaper library, who would call "Copy!" which meant I had to take something from her and give it to a writer or an editor. Everyone else did the same but she, somehow, managed to sound worse.
Little did I know she would become my best friend, as she is to this day. We've been through a lot together, and we've had a lot of fun together (took in lots of baseball games together) and we've had a lot of disappointments, sorrows and losses together, taking the bad with the good.
As for Petie and Ralph in the photo above, they were praying for my family when my brother Rob was born in 1968. He was a teeny tiny preemie, but he made it.
So Ralph and Petie's kids, the ones I babysat, began babysitting my baby brother. We came full circle together, my family, Petie and Ralph's family, and me. I can't forget Edith, whom you can barely see in the picture, but she was, with her husband George, with my family all the way.
I guess spilling that water today wasn't a disaster. I got to reminisce a lot, all because of the wet picture I found when I was supposed to be watering my plants. 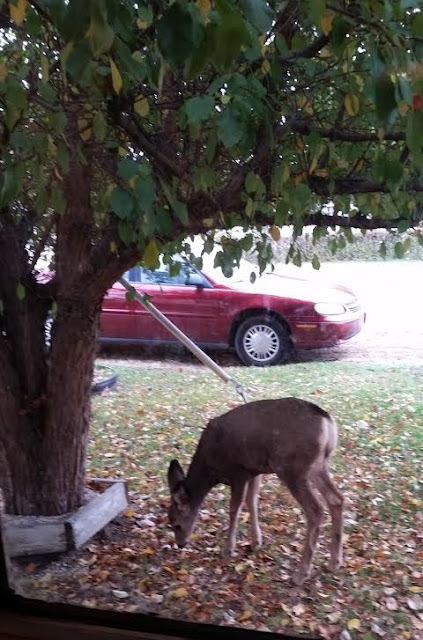 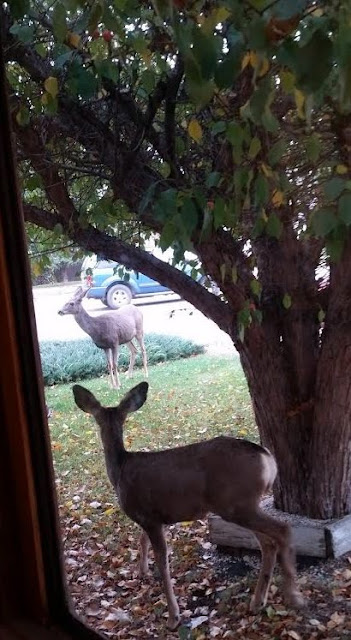 Here's one of the others, saying we must go.

Now all that the camera can see is our white tails. 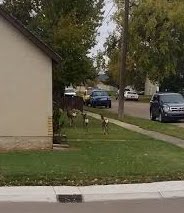 When the deer appeared to feed at our ornamental crabapple tree a couple of days ago, I thought they were early, forgetting that there's no such thing as 'early' here in Alberta. The deer must have known the weather would change, because today we have snow, but more on that later.

When Lindy was young, and I was not 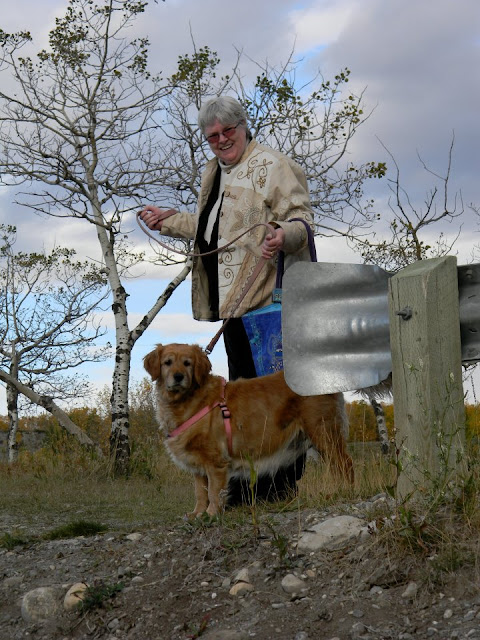 Thanks so much to our friend Mara, originally from the Netherlands and now enjoying a busy life in Scandinavia, for taking this picture.
Mara came to Canada a few years ago, in hopes of finding work and staying here in Alberta. Dick and Lindy and I were all pulling for her, but there exists a rule (maybe it's even a law) saying Canadian citizens get first crack at job openings. This is excellent for unemployed Canadians, of course, but we were rooting for Mara to be able to stay, and she couldn't.
Lindy was very disappointed, as Mara is one of her favourite friends, and I was disappointed, too. In this photo, we were taking Mara to Banff and Lake Louise. Lindy and Mara went for a walk alongside Lake Louise, while I sat on a bench and enjoyed the magnificent scenery.
Lindy can no longer go on long walks, any more than I can, but she is still happy...although she would have loved to keep Mara here.

Of all the preposterous assumptions of humanity over humanity, nothing exceeds most of the criticisms made on the habits of the poor by the well-housed, well-warmed, and well-fed.

I wish I knew who said this. I had saved it to my desktop at some point, without attributing it to anyone, and am now furthering the attribution problem by quoting it here. To everyone out there, if you know who wrote this, please let me know.

Meanwhile, I copied it then, and am quoting it now, because I feel it to be particularly apt at this point in the history of the world.

I also just deleted a treatise of my own, raging, in my old-lady way, against injustice and against those who would deny help to refugees from other countries.

I went on and on and on, as I am apt to do, and realized I was on the verge of raving, which I'd much rather not, so I deleted it.

I don't pretend to have any answers. I surely have none. But I also have no criticisms to make of people who are living in poverty through no fault of their own. Yes, that's the word used in that quotation: criticisms. How dare anyone with a good life criticize someone who is struggling to survive?

There used to be a saying...I don't know if it is still used today..."walk a mile in my shoes"!

Sharing this with Lady Fi's wonderful meme Our World Tuesday.
Posted by Kay L. Davies at 3:11 PM 3 comments: Links to this post 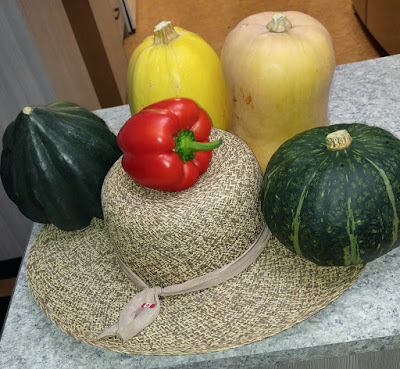 I've been stressing over things the past few days, because my computer has been giving me  trouble, and decided I needed something to cheer me up.
A few minutes after I decided that, I walked past the kitchen island where we keep fruit and/or vegetables in a bowl, and noticed this straw sun-hat sitting amongst the squash.
Just for fun, I arranged the squash around the hat brim, and added a red bell pepper on top, for some colour. Just a silly thing to cheer me up.
And it did.
Names of squashes in order from left: Acorn, Spaghetti, Butternut, and one whose name I can never remember...a Kabocha Squash. Rather like "Ha gotcha, squash!"
Very silly, but the silliness cheered me up immensely. Maybe you'll laugh at my squashes, too.