If you missed this, here it is again

Wishing my friends in the US
a very happy Fourth of July!
(Posted also last week on Skywatch Friday)

Note: I am quoting below, without permission, from Verbatim: The Language Quarterly, back issues of which, I understand, will be available online in the near future. Meanwhile, I thought this bit of fun was a lot of fun.

Grammarians take note!
"We (at Grammarly) gently poke fun at the messes people can get into with English, and the misunderstandings that arise from the language."

I'll be watching for it to come online, but now I'd like to quote a few choice bits, as Canada's neighbours to the south get ready to celebrate their Independence Day holiday.

"One of the causes of  the Revolutionary Wars was the English put tacks in their tea. During the War, the Red Coats and Paul Revere was throwing balls over stone walls. Finally the colonists won the war and no longer had to pay for taxis.

"Thomas Jefferson, a virgin, and Benjamin Franklin were two singers of the Declaration of Independence. Franklin had gone to Boston carrying all his clothes in his pocket and a loaf of bread under each arm.
"He invented electricity by rubbing cats backwards and declared, ‘A horse divided against itself cannot stand.’
Franklin died in 1790 and is still dead.

"George Washington married Martha Curtis and in due time became the Father of Our Country. Then the Constitution of the United States was adopted to secure domestic hostility. Under the Constitution, the people enjoyed the right to keep bare arms.

"Abraham Lincoln became America’s greatest Precedent. Lincoln’s mother died in infancy, and he was born in a log cabin which he built with his own hands. When Lincoln was President, he wore only a tall silk hat.
He said, 'In onion there is strength.' Abraham Lincoln wrote the Gettysburg Address while traveling from Washington to Gettysburg on the back of an envelope.
He also freed the slaves by signing the Emasculation Proclamation, and the 14th Amendment gave the ex-Negroes citizenship. But the Clue Clux Clan would torcher and lynch the ex-Negroes and other innocent victims. It claimed it represented law and odor.
On the night of April 14, 1865, Lincoln went to the theatre and got shot in his seat by one of the actors in a moving picture show.

Trek across Alberta to B.C. coast

Not a trek, not really, at least not on foot, but this month we did drive from southeastern Alberta to southwestern British Columbia with visits to Revelstoke, Kamloops, Ashcroft, Hope, Aldergrove, Coquitlam, Langley, South Surrey, White Rock, Crescent Beach, Kelowna, and Golden, BC.
It was quite a lot of driving for my husband, who didn't complain about not knowing know my friends and relatives very well, except my brother Clint, our other punster. Thanks, Dick!


Of course we took our bouncy forty-pound Bonnie-Belinda dog, so Dick always had something to do.
This dog would keep anyone busy, family or not: go-for-a-walk, go-for-a-run, even stop to smell the flowers in case a tree or bush was hiding a rabbit or, something new to her, a chipmunk!

"Flowers under a blue sky. It doesn't get much better than this!"

After visiting friends in Kelowna, BC, where I grew up, we headed back to Alberta via Golden, BC, a place neither of us had visited.
We were impressed.
Two rivers run through this small town of fewer than 5,000 people, so Golden is a tourist mecca for water sports.
The larger and more widely known of the two rivers is, of course, the Columbia, which flows from its source in Columbia Lake at an elevation of 2,700 feet (830 meters) near the crest of the Rocky Mountains southwest of Banff National Park, all the way across the border to the Pacific Ocean at Astoria, Washington.
The town of Golden's smaller, faster river is the Kicking Horse, beloved of sports enthusiasts addicted to white-water rafting.


For  Fiona's  Our World Tuesday

The greenest green I've ever seen


Sometimes British Columbia, Canada, where I was born, surprises me.

I was born on "The Wet West Coast" but grew up in the near-desert dry of BC's Okanagan Valley. When I finished high school, however, my father moved us all, lock, stock, cat, and dog to their favourite place: White Rock, B.C.

Eventually I became used to the dampness
of coastal living
but I suspected it wasn't really
for me even though I loved the ocean, the ins and the outs of it, and I loved to see the greenery.


Everything is green on the B.C. coast and I, in particular, if not both of us, loved the lush look of it.

When my husband and I travelled from our home on the Canadian prairie and over the Rocky Mountains to the coast for a visit with my family, I loved it all anew. For a while I even ignored the pain in my old aching body!

I cannot say we saw no rain, because there were a couple of hours on two different days when we got wet but we saw much to love in the greenery, especially on sunny days when it contrasted so well with a blue sky.
(Our return trip through the Rockies is a whole 'nother story, to be kept for another day.) 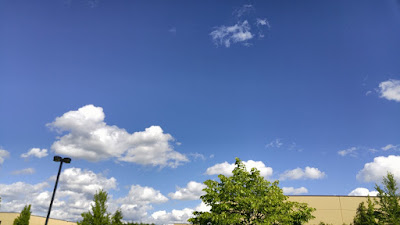 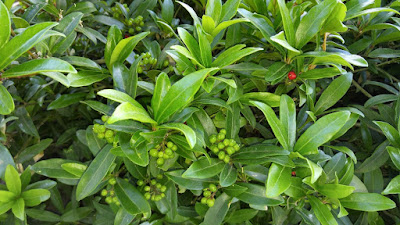 Down by the river side

Coulee — Wikipedia says "a deep ravine" and I add "carved by a river, over a long time."

Meanwhile...I know I have posted, more than once, that anonymous comments will be deleted. I enjoy comments, but I cannot accept any from anonymous sources. —K
Posted by Kay L. Davies at 8:11 AM 18 comments:

Numbers of Alberta deer species are disappearing, as well as pronghorn antelope, which might not have disappeared—apparently they might just have changed location. We loved seeing them, and we miss them.
We have deer, however, and in the winter they come to eat from our ornamental crabapple tree. They're so beautiful to watch! 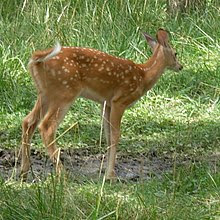 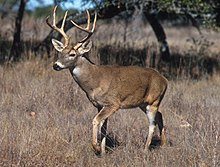 We used to see herds of pronghorn antelope not far from our house, but for several years now they are gone from this part of southeastern Alberta, seemingly not to return. However, nature can surprise us at any time. 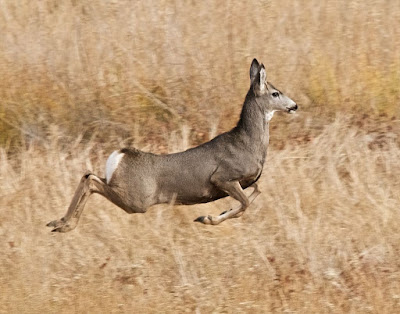 Mule Deer "Stotting"
(trotting with all four feet
off the ground) 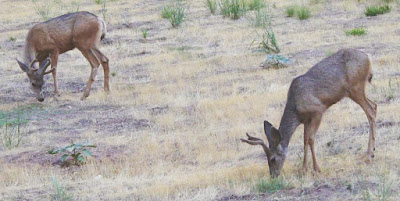 
Ever since we moved to Medicine Hat, Alberta, we have enjoyed watching deer eating the ornamental crabapples off the tree in our front yard. I am no naturalist, and I still confuse white tail deer and mule deer, no matter how many times I'm corrected. But I'm happy to see them, and that's what counts in My World.

Posting for Fiona's OUR WORLD TUESDAY 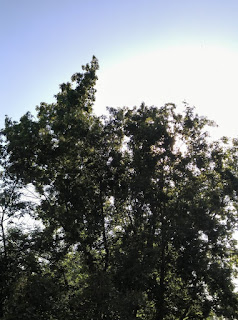 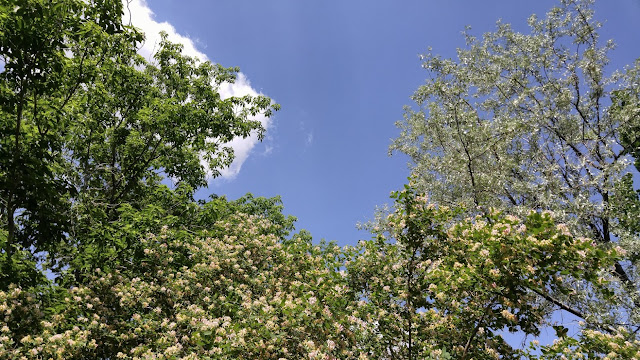 At this time every year I always post photos of the beautiful skies of southeastern Alberta, where I live with my husband Richard and our funny little terrier-mix Bonnie-Belinda. 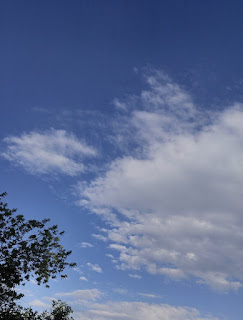 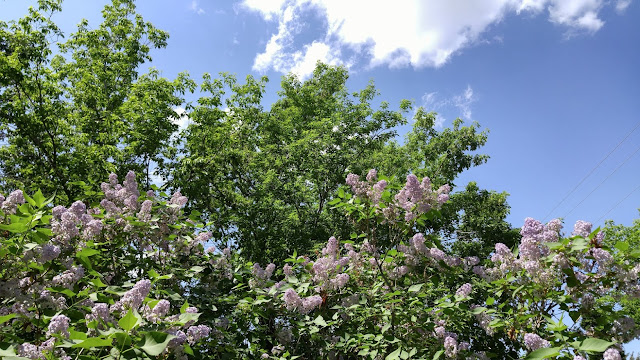 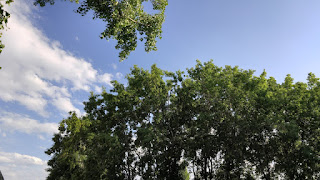 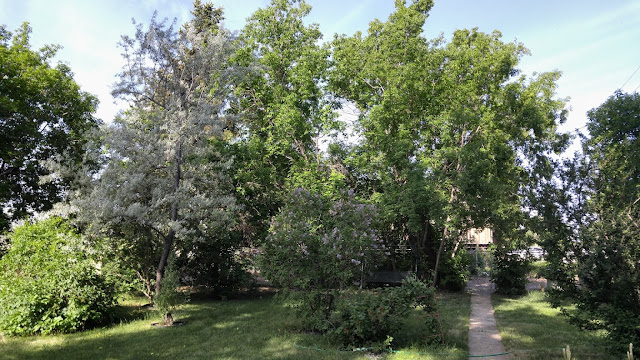 The photos seldom change from year to year, of course, because there isn't much new out there, but the sky does change, and I always love the view we have when standing on the deck, looking down the path to the back gate. 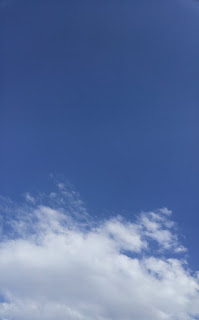 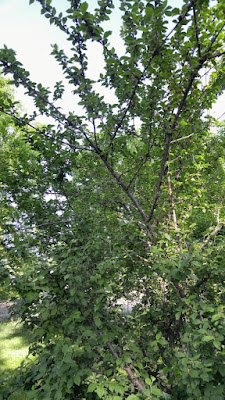 A new feature this past year or so has been the delight of our garden and household, our sweet, funny little terrier-mix, Bonnie-Belinda, who 'owns' the back yard.
She allows access to us, but only to us. At the front the door, visitors get short shrift, along with the patented Bonnie bark, but she agrees to let them in if we vouch for them.
Cyclists and neighbouring dogs are another story, however, and subjects good for another day.


Posting here for Fiona's
SKY WATCH FRIDAY
(I admit Bonnie is a little low-slung to qualify for Sky Watch photos, but we like to include her whenever, as Fiona surely understands.)