Does anyone remember when "ugly Christmas sweaters" were all the thing? They're still out there, although mine is very, very old.
Yes, I have one of them. I don't know where it came from. My husband tries to lay claim to it, every now and then, but he's Jewish, which pretty much rules him out. (insert smiley-face here, folks)

I suspect I might have found this ugly sweater in a used-clothing store once upon a time, and bought it to wear to a friend's Christmas party.
Still, I found myself wearing the sweater today because it is beyond cold here in southeastern Alberta. It is C-O-L-D and then some. I haven't been out there, but our little dog, Bonnie-Belinda, has been enjoying two-hour morning walks with her daddy, ever since spring...right up until yesterday when she decided five or ten minutes in the back yard is plenty.

How cold is Alberta-cold? We reached the point where Celsius and Fahrenheit are both below 0, with Celsius all the way down to -30 below 0 today...a mere -20 Fahrenheit.
The sun has gone down, so it's time for me to put the sweater on again, but first I'll share this with Fiona's wonderful meme, Our World Tuesday. 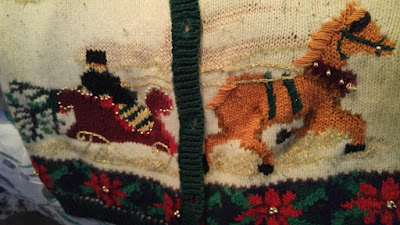 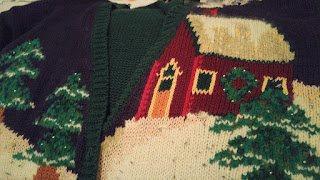 Who can? The eagle cam can

In my native province of British Columbia, Canada, birdwatching...especially big bird watching...has been a (wildly) popular online sport for about years thanks to David Hancock of the Hancock Wildlife Foundation, skilled photographer Christian Sasse, and the helping hands of caring British Columbians. David Hancock's 'bird cams' went from the experimental to the popular, accepted, and expected.

The time and patience of David and his crews of volunteers and loyal followers, was more than rewarded this year when a miracle happened.

Everyone in BC and most of the western world—watched the Sidney, BC, eagle cam footage of its nest because it was occupied by two eagles, two eaglets, and a baby red-tailed hawk!

In British Columbia, Alaska, and Washington State, then across the continent, and perhaps the world, nature lovers and scientists alike watched that nest with eagle eyes—always cheering for the little hawk, while always afraid its adoptive eagle parents would one day begin to think of it as prey.

The parenting instinct won over, and the eagles raised their littlest chick with the same care and attention afforded their original nestlings. See the National Geographic story about "Spunky" the little hawk raised by eagles.

Back 'home' in British Columbia, although the numbers of Bald Eagles did diminish, the species was never endangered to the extent that it was in the US. While driving alongside the coast from the suburb of White Rock on the US border, on my way to work in the city of Vancouver, I could witness for myself the increase in the BC eagle population. More and more of the huge raptors could be seen flying across the highway to the Pacific Ocean each year.

Bald eagles live near oceans and generally feed on fish, but they will also catch small mammals or feed on carrion. Younger bald eagles travel great distances...Florida-based eagles have been located in Michigan, while California-based bald eagles have traveled right up to Alaska.

About the eagle cams:
I remember when the late Richard Pitt, husband of a high school friend, was helping David Hancock place some of the first eagle cameras high in the trees of southwestern British Columbia. Just talking to Richard, I felt I was part of a big adventure— and, with a lot of work and enthusiasm on the part of nature-loving British Columbians, it really did become just that.
If this 2017 list  is any indication, there will be many eagle adventures in British Columbia next year. Conservation of wildlife and habitat has become one of the most important efforts on the planet, and we may just have a chance, thanks to dedicated people like David Hancock and Dr. Christian Sasse.
Although I no longer in live in my beautiful British Columbia, I do love to write about it.

Some of the eagle cams plus YouTube
Hancock Wildlife
White Rock, BC
Victoria and Sidney, BC

(Further online investigation has yielded some evidence that Spunky may not be the first baby hawk to be raised by eagles. Birding lore suggests that when two infant hawks have been brought to a nest to provide food for eagle nestlings, one could survive while the other is eaten. The wee hawk would, of course, have its mouth open preparatory to receiving food, and the eagle parents could recognize the open mouth only as that of a nestling in need of feeding. I have been unable to verify this theory, however, and I am less than even an amateur birdwatcher...I'm just a wannabe.)

Sharing the eagles and eagle cams with  Our World Tuesday
Posted by Kay L. Davies at 5:41 PM 11 comments:

I knew two, found a third, but more?

Scotland, England and Wales. Are there more countries with tartans? Yes, Ireland... and others, but more about them soon.

I grew up knowing I could wear the tartans of two Scottish clans: my mother was born a MacKenzie, and Grandma Davies a Fraser, so I knew I could wear the tartans of those two clans.
I thought I understood why Grandpa Davies considered himself Scottish, because he grew up just outside Glasgow, and once a Glaswegian, always a Glaswegian and I didn't think to ask anyone about other tartans in Britain.

My MacKenzie grandfather was born, just as I was, in New Westminster, British Columbia, but his parents and at least one or two of his many older brothers moved to Canada from Scotland.


Then, more recently, I found out there are also Welsh tartans, and realized that Grandpa Davies had had a choice... he could, if he wished, wear a Scottish tartan, but he had inherited the right to wear a Welsh one. This, in turn, might now give me a chance to wear this lovely blue Welsh tartan, to go with my blue eyes!

I think I would be remiss if I did not tell you about one of Scottish history's most famous MacKenzies: Roderick, who, while fighting for the Jacobite cause, gave his life to save a prince.

The Jacobite uprisings, also known as the Jacobite rebellions, or the War of the British Succession, were a series of wars in Great Britain and Ireland occurring between 1688 and 1746.


The uprisings were intended to restore the last Catholic British monarch, and later his descendants of the House of Stuart, to the throne of Great Britain.

England's King James II was deposed in 1688. For almost a hundred years, the Catholic Jacobites fought to reinstate him to the English and Scottish thrones.


When Roderick MacKenzie, son of an Edinburgh watchmaker, joined the Jacobite army, it was discovered that he bore an uncanny resemblance to Bonnie Prince Charlie. Roderick was, therefore, asked to ride, not quite with, but near the Prince.
This ruse managed to save the Prince for a time, but it cost young Roderick his life. The English forces, misled by the resemblance, captured and injured Roderick. As he died, he said, "You have just murdered a Prince." The English troops beheaded him, then took his head to London to 'prove' they had murdered Bonnie Prince Charlie. However, unbeknownst to the English, and thanks to Roderick MacKenzie, the Prince was able to escape and eventually took refuge 'over the sea to Skye' as the old song says.

Now, friends, it is winter here in the northern hemisphere and so, on a cold and blustery night, you might want to sit yourself down to read about Roderick and his brave sacrifice here at this link:
http://www.thesonsofscotland.co.uk/roderickmackenzie.htm


The ancient pile of rocks pictured below is a cairn
commemorating the bravery of young Roderick MacKenzie.

Many thanks to my dear Scottish friend Yamini MacLean who took me to see the cairn, and to see as much of Scotland as we could pack into that all-too-short visit to my ancestral land. 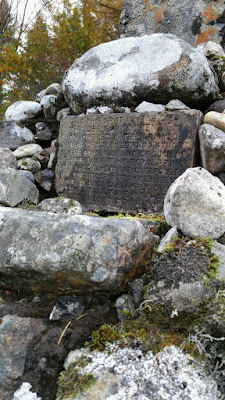 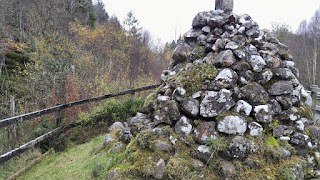 The story on Roderick's cairn: 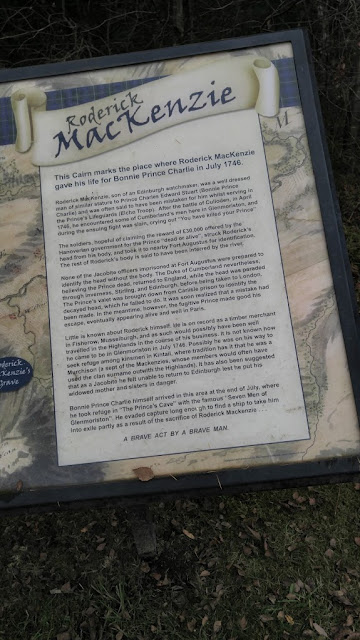 An Unfittie's Guide to Adventurous Travel

I had a blog post all prepared for this week's Our World Tuesday, but Lady Fi's beautiful sky photos in today's e-mail reminded me that we have some lovely night skies of our own right here.

I photographed the panorama shown above while standing on the edge of the deck, wearing my bedroom slippers instead of shoes, as I waited for the dog to come in.

And then, the sky was so beautiful I just had to ignore my lack of footwear and move to the cement pad by the garage. I don't recommend wearing lightweight bedroom slippers on concrete in December, but the sky was well worth the temporary pain. 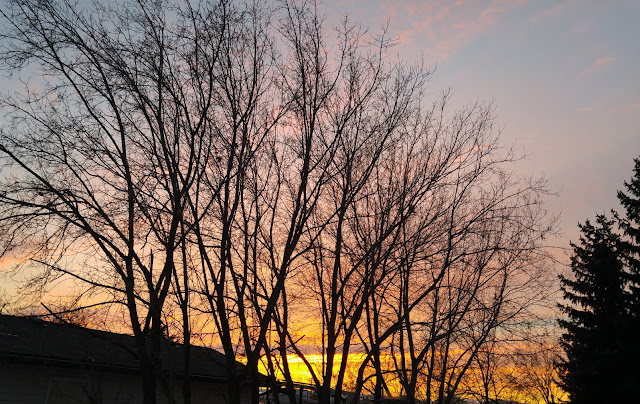 Our little town in southeastern Alberta is known as The Greenhouse Capital of the Prairie, and many of my backyard pictures, as in the photo below, show the row of greenhouses one street over, with an empty field in between. It really can't be helped sometimes. I'm shooting with a cell phone in low light, so I can't run out across the snow-patched lawn in order to eliminate unwanted structures. Just shooting blind, really. (Pun included for hunters, if any are out reading this.) 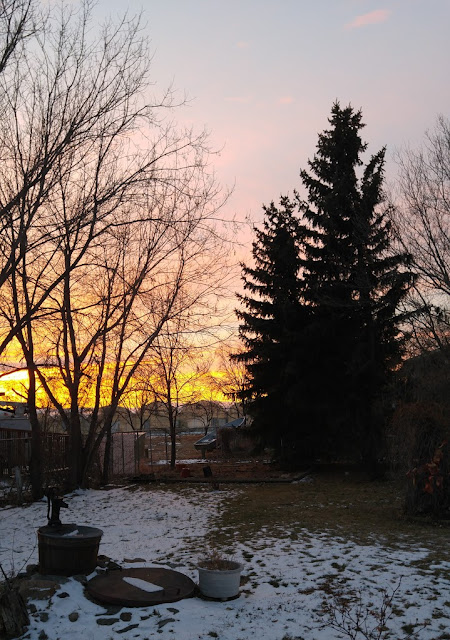 And this last shot, below, was taken by my husband when he and the dog were out in the yard. It was getting late, and already very dark, so the photo lost some of its clarity when enlarged, but is irresistible nevertheless.
Richard Schear photo

We love our energetic little terrier-mix. Her name is Bonnie-Belinda and she is, as my mother used to say, more fun than a barrel of monkeys.

We start here with a nice quiet little photo opportunity. Bonnie had been very good, staying with our friends Larry and Gayle while Dick took me to an appointment.

We had a very short visit with them when we went back for her. We didn't even stay long enough to take off our coats,  but we did have time for our irrrepressible dog to star in... 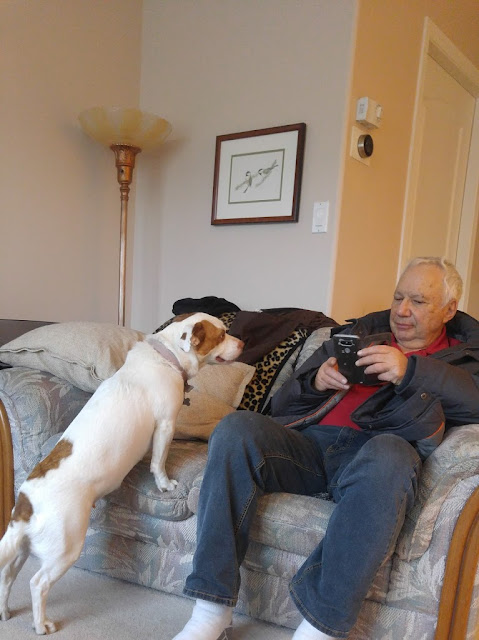 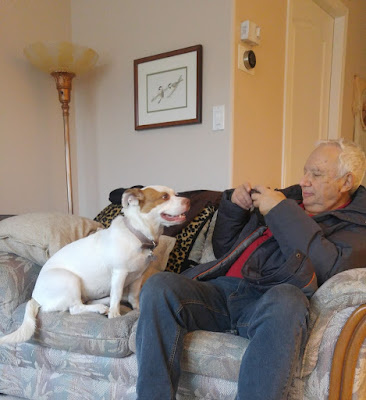 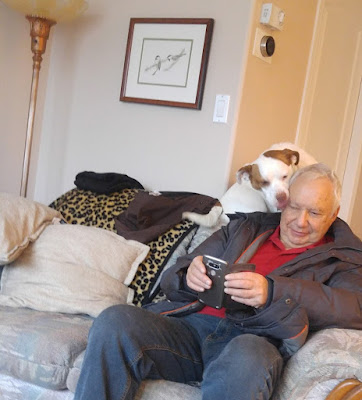 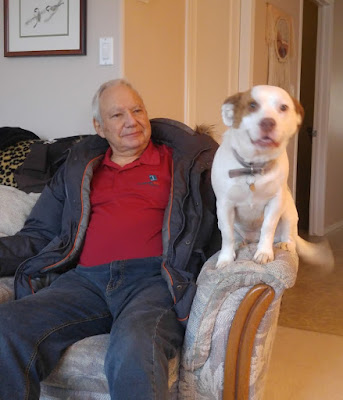 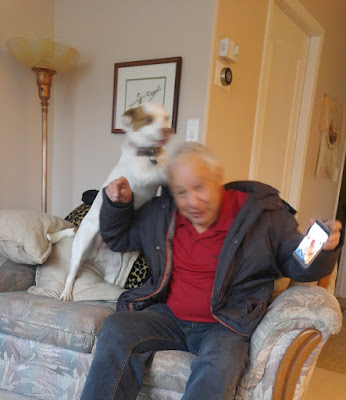 But photo ops with Bonnie can end up like this!