Shoot and cut and run...

Many photos taken through car windows are doomed to be discarded. It's the nature of a drive-by shot but today, as I was attempting to be ruthless with my drive-by Rocky Mountains photos, I found myself strangely sad.
It was an adventure, not new to me but new to the me who finally owns a cell-phone camera.
Scenery, not selfies, is what I'm after, and I'm sure I could have done better. Maybe next time...there are places here in southern Alberta that I haven't explored yet. Have you ever been to Head-Smashed-In-Buffalo-Jump? Neither have I, but soon...
Meanwhile, a few more photos my cell-phone took as we travelled through the Rockies. But first, I rather like this one taken as we drove through the dry interior of British Columbia on our way to Kamloops, BC. The mountaintops look so sharp, they could cut open the sky. 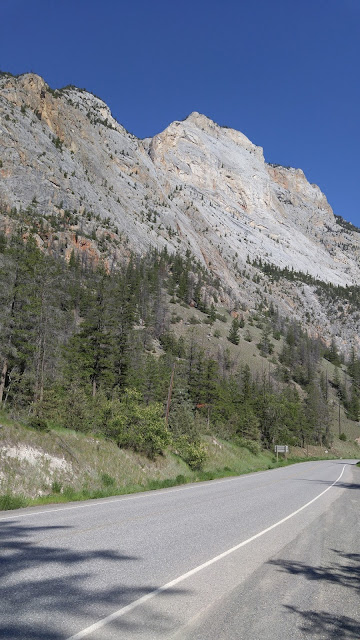 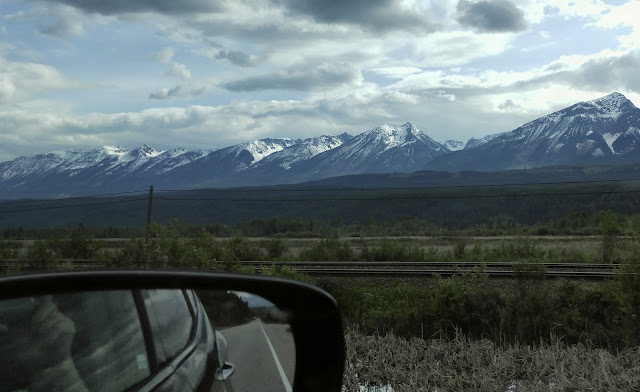 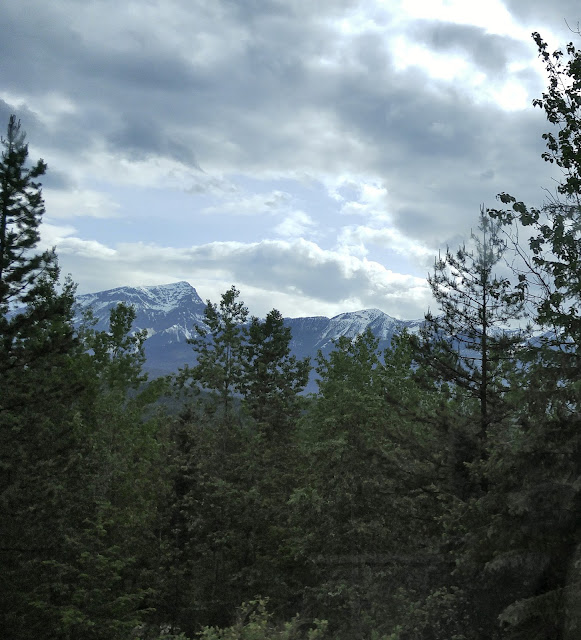 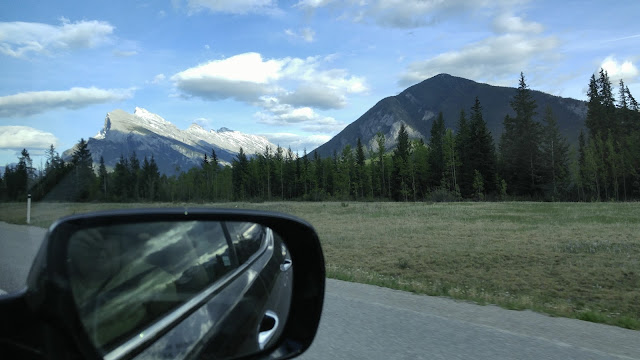 I'm almost as old as Whistler's mother, so...

...my husband took all the Whistler photos during a brief walk-around.

Whistler, British Columbia was the site of the 2010 Winter Olympics. There are so many sights to see there that a drive-by visit is not enough at all.
Here are a few photos of the town, near the information centre where Lindy and I waited comfortably in the car. (More about that car coming soon.) 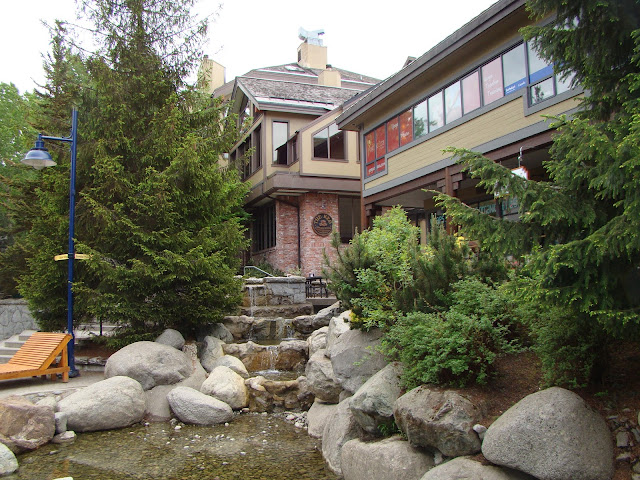 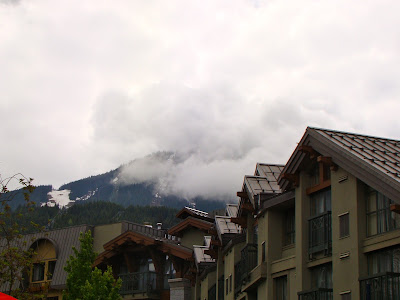 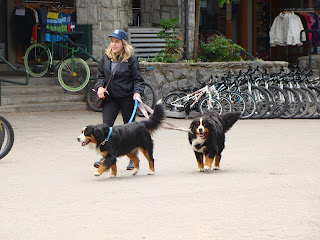 Clouds hung low over the mountain peaks, but it was a nice day down below, as you can see with this young lady walking her Bernese Mountain Dogs.
"Mountain Dogs" and ski hills? A coincidence? I can't help but wonder if they're rescue dogs. 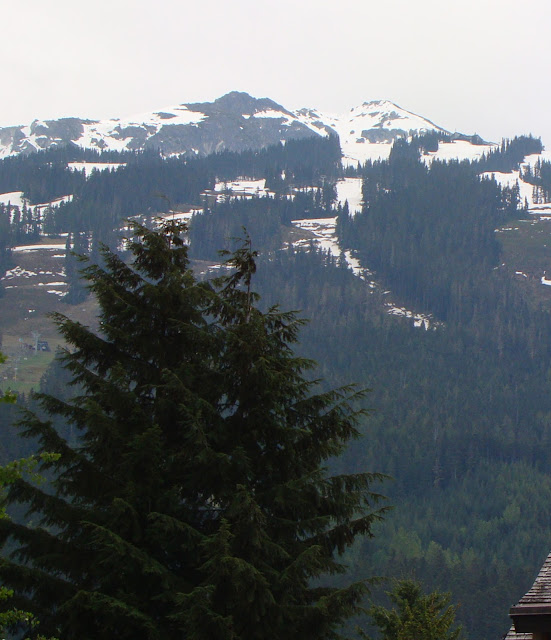 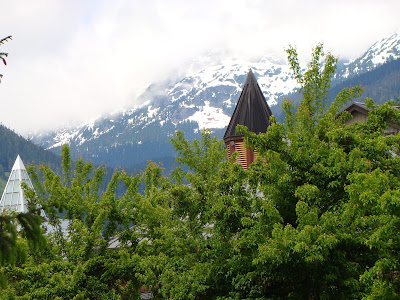 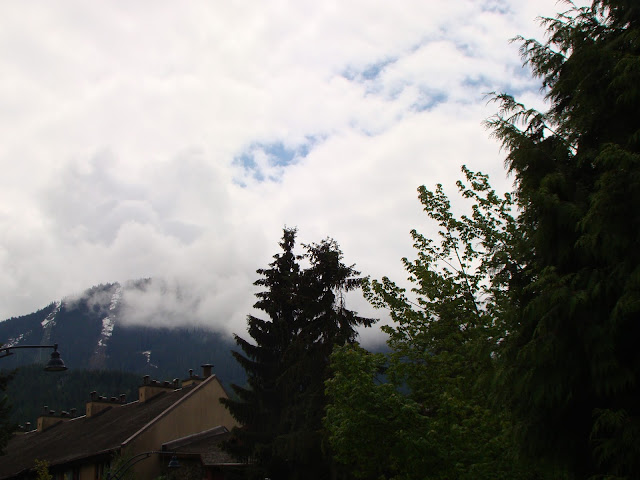 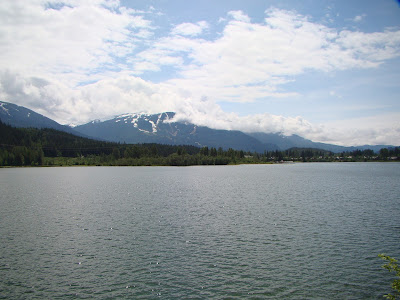 Photos by Richard Schear, 2016
Connecting with Our World Tuesday. A tiny bit late.

I think this is wonderful news, and what better way to disseminate it than on my very-little-read-any-more Unfittie's Blog?
Okay, yes, much better ways do exist, but here you are...feel free to share.

These are the Blue Canadian Rockies of old-song fame, featuring less-than-perfect photos taken in drive-by shootings through windows and windshield, with my husband driving at highway speeds. (Clickable song title.) 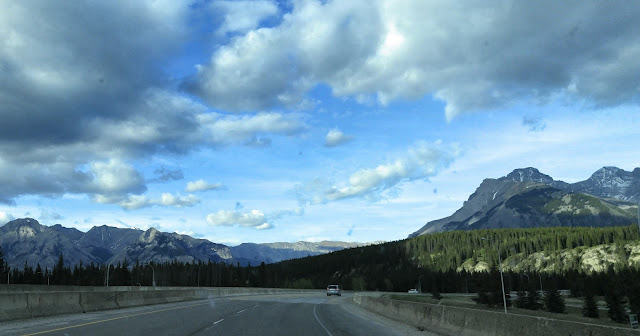 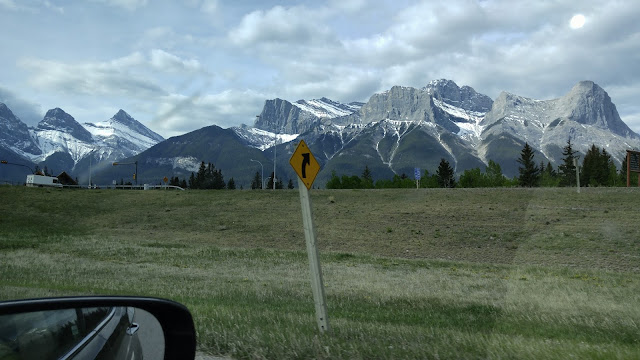 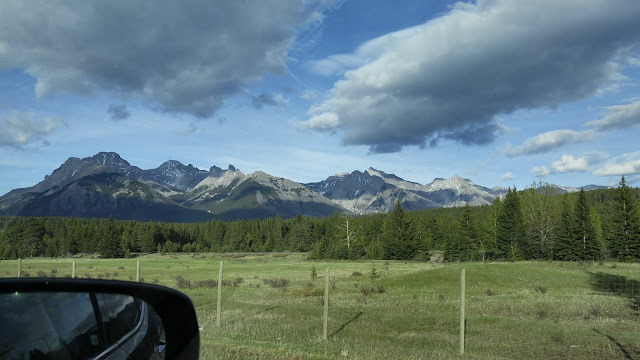 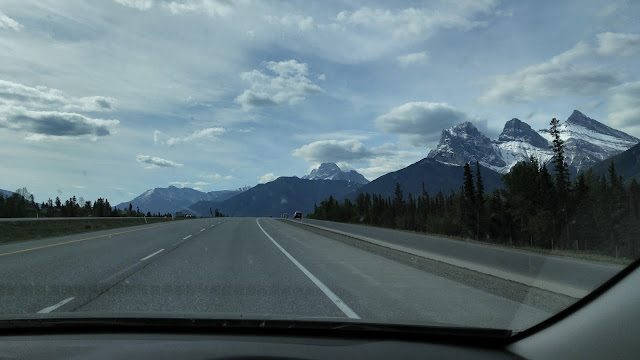 Just a few photos from our visit to British Columbia, my home province. Canada has some lovely places, and I love ocean, mountains, and forests best of all.

Here, Lindy takes Dick for a walk while she looks for just the right piece of grass, because manicured greens are hard to find in the mountains. The green of the lake in the first photo is caused by glacier-melt. 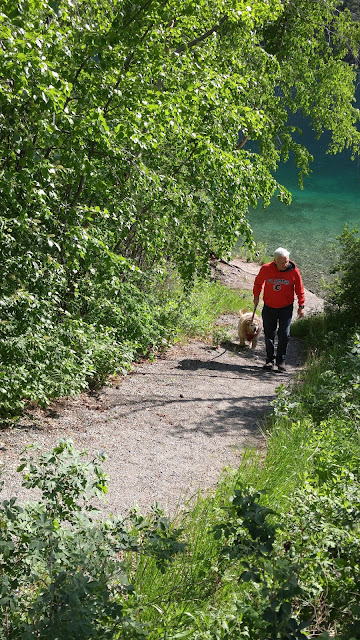 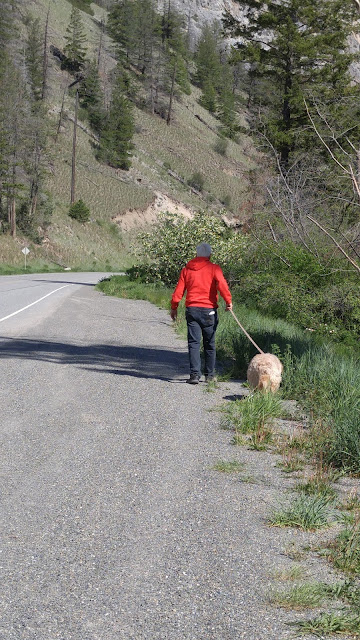 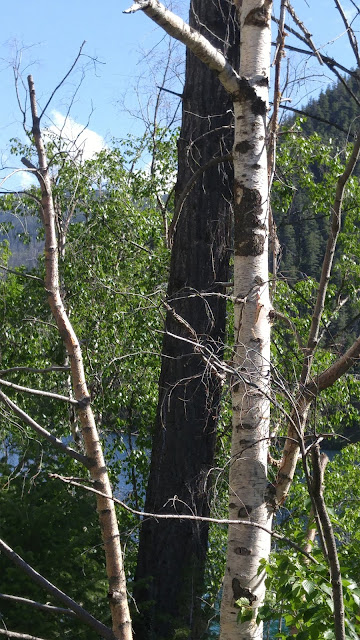 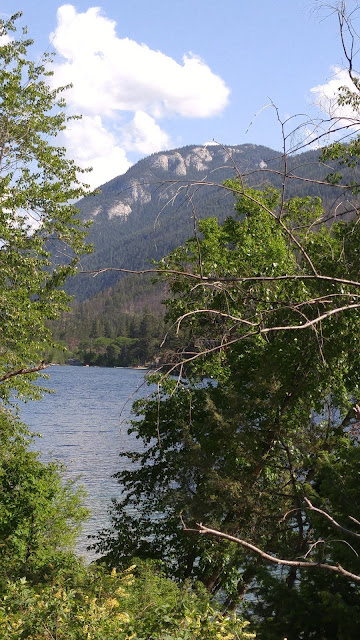 Lying down on the job

Lindy went for a walk up the lane with her daddy today. She got all the way to the lane (a distance the length of our back yard and a bit) and up the lane for a distance the width of our yard plus the neighbour's gate. Then she needed to rest. We love Lindy.

On the news, we have...new news

Our local TV station here in Medicine Hat/Redcliff interviewed my husband by phone while he was in an evacuation camp in northern Alberta. Then someone from the station phoned and asked for a photo of Dick to go with their interview. I, of course, sent them four, and they chose this one, my favourite. I taped the news broadcast for him, so he can see and hear how wonderful he is. (Smiley face.) 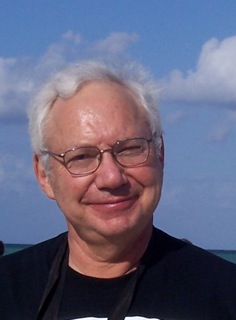 The old boy looked pretty good
on the evening news, I thought.

The fire in Fort McMurray, Alberta, displaced 80,000+ people, but so far I haven't heard of any loss of life. Firefighters from across Canada, have done a stellar job, but a great many homes have been lost, and there is no sign of Fort McMurray residents being allowed to go home to assess the damage.
The question of my husband's car, which he had to abandon at the MacDonald Island Centre recreation complex, pales in comparison to the devastation of those who were forced to abandon their cars, and their homes.
I understand the SPCA did what it could to save pets who were left behind. This subject is very painful for me to think about, of course, and I have no details. The Canadian Red Cross has its hands full with donations of clothing and food for fire refugees, and Syrian immigrants in Alberta, themselves recent refugees, have declared their support for the people of Fort McMurray.
There is a province-wide sense of community which, if it lasts, will unite the people as never before. I think of the Calgary flood of 2013, and the goodwill it fostered between Albertans. The present disaster can, I hope, do the same.

These before and after photos of Fort Mac were posted by www.theweathernetwork.com
Sharing with Lady Fi and the gang at Our World Tuesday. 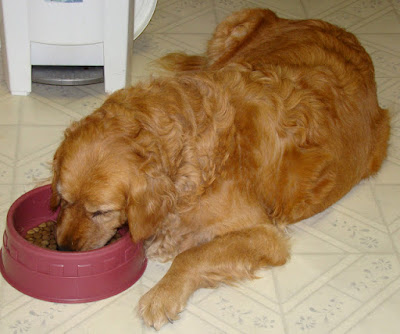 Eating while lying on the floor is always best, whether there's food in the dish or not. 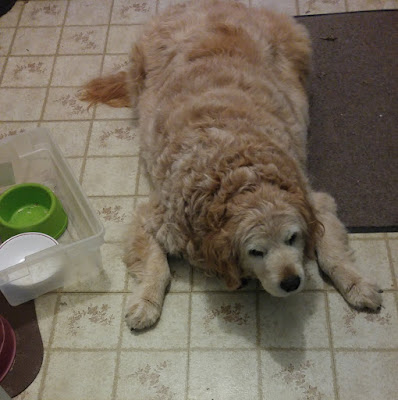 The very fires of hell

The city of Fort McMurray, in the northern Alberta oil patch, was caught in the path of a raging forest fire this week. Everyone in the city has been evacuated. Among the evacuees is my husband, Richard Schear, now staying with some hundred others in a workers' camp farther south. His car is still outside the trade show facility where he'd been in "Fort Mac" on a business trip, and we don't know if it has burned or not.
I am very grateful that he escaped safely, and proud that he volunteered to help register names of people displaced by the spreading fire. Then he and others were put on a city bus and sent south toward safety. While on the bus, he spent his time amusing babies, toddlers, and young children.
Yes, I'm proud of him, but I'm still miffed. I'm no longer angry, but miffed is a good word for how I felt when he refused to take my advice and leave a day earlier. Places to go, people to see, you know, can't stop because of a fire...but I was born, raised, and spent my entire working life in British Columbia, so I knew enough about forest fires to be afraid...to be very afraid.
In the Macleans news photo below (used here without permission), smoke and flames can be seen coming over the hill, heading toward the lightpoles of town. The people on these streets must have been very, very afraid. 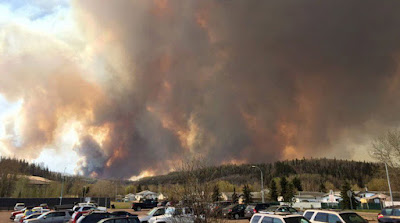 A week ago, I posted a photo of snow on my ornamental crabapple tree. Now we are headed for a heat wave.

I'm going to have to remember to do some watering, too, because rainfall levels in Alberta are well below the norm.
But first, I'll have to fill Lindy's pool, so she'll have a place to cool off if I'm not home to let her into the house.
I don't have any "today" photos of Lindy, and you'll never guess why. There's an old expression about people being so ugly they'd break the camera if they were being photographed.
Well, I got my hair done and decided to take a "selfie" of myself with my new cell phone, which is also my only operable camera.
So I got the selfie, but my phone/camera died, immediately thereafter.
True fact.
Posting for Our World Tuesday, to show Lindy's world, and mine. 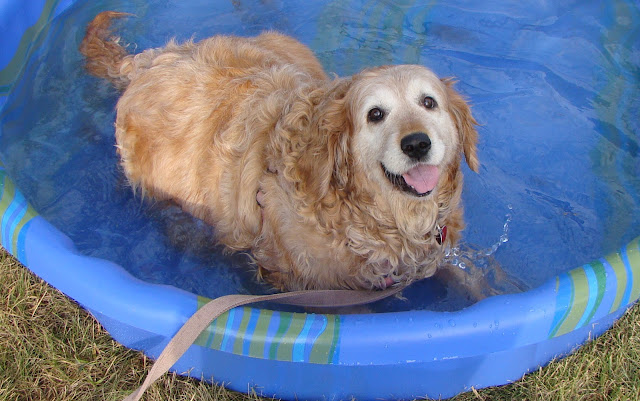 When Lindy was younger, she'd jump into her pool, leash and all. But last year, old and blind and less inclined to play, she didn't look quite as happy. 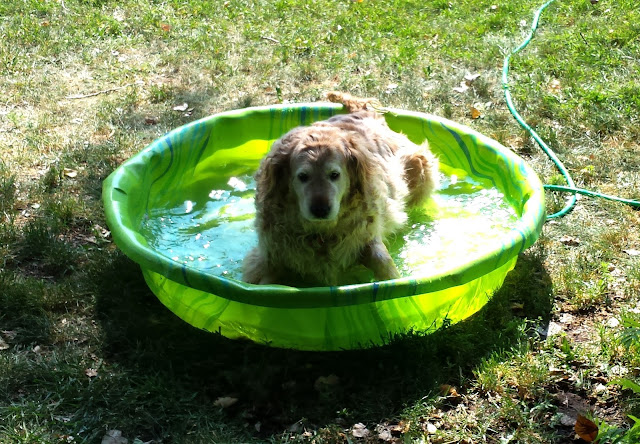