I love this photo

I've been wanting to post this picture for a while now. It isn't anything special, except to me and to Lindy's daddy. If you look v-e-r-y carefully, you can just see his elbow, as he works at his computer.
On the floor, however, is a wet dog. And not just any wet dog...it is, of course, our Lindy, who tries to get as close to my husband as she can, no matter where he is or how busy he is. (Lindy and I consider ourselves fortunate because her daddy still works, to keep us in dog food and other necessities.)

I'm posting this for Our World Tuesday, brought to us by Lady Fi, whose beautiful Goldens would hardly recognize Lindy as one of their breed. Yes, she does look more like a sheep. Her hair always curls when it's wet.

Lindy loves her daddy, and tummy-rubs


Linking to Our World Tuesday 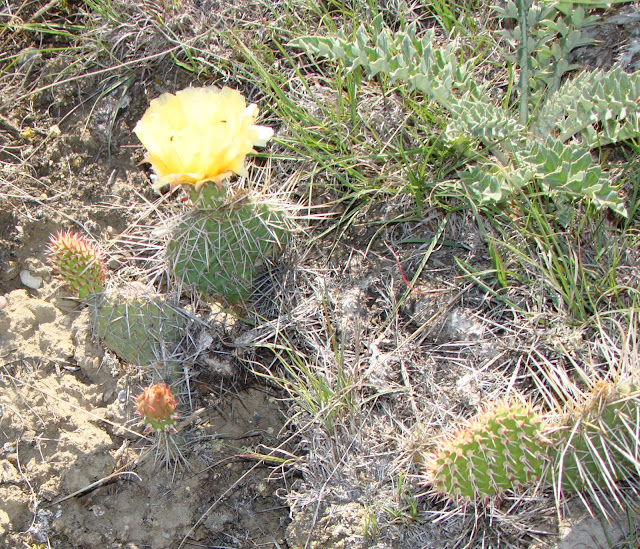 My husband went out cactus-hunting again, this time with a "real" camera instead of the camera in his cellular phone. Are the photos any better? I don't really know...perhaps. I am doing some solo travel this year, meeting up with Himself for the last half of the trip, and I'm not taking any camera except the one in my cellular phone. Of course, I won't be able to use it as a phone unless I can get a good deal on a plan of some sort. Think, think, think.
In the meantime, cactus buds below and, below those, an absolutely beautiful blossom. I don't know whether to think "irridescent" or "luminous" but I'm leading toward "luminous." All that beauty in the desert part of the prairie. 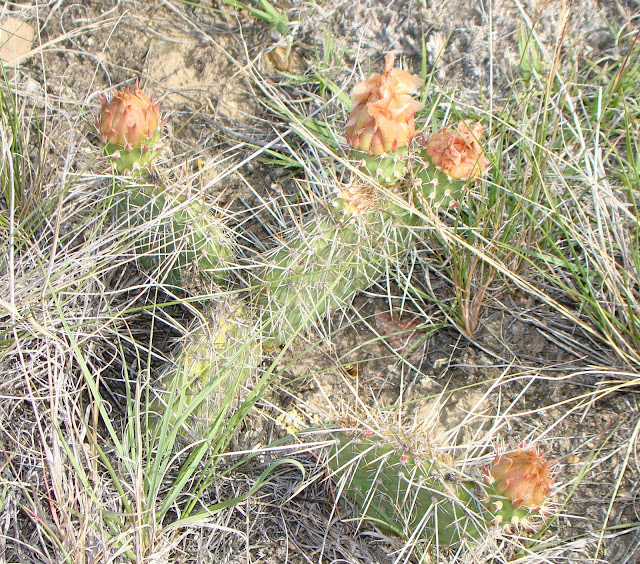 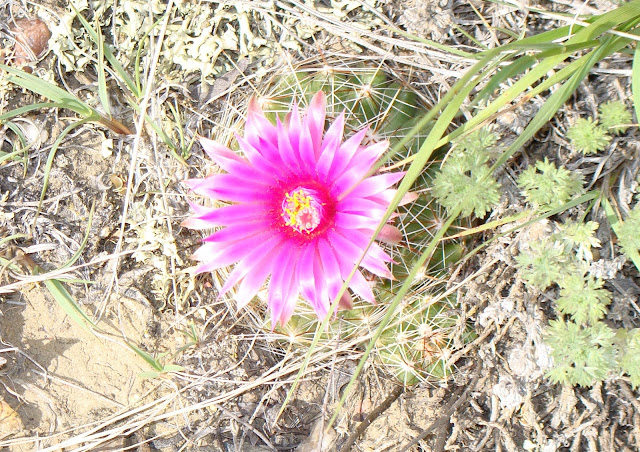 The wild and woolly...and prickly west

Yes, 'way out west here, in southern Alberta and a few particularly hot, dry parts of British Columbia, live some small wild cacti, which can surprise unwary hikers with their sharp spines. These photos were taken yesterday by my husband, Richard Schear, in the coulee not far from our house.
The cacti with the yellow flowers are Prickly Pear Cactus, he says, while ones the with pink flowers he described as Escobaria Vivipara. 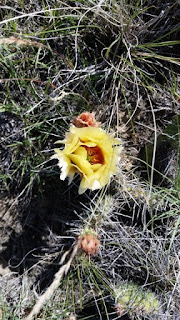 In the first photo we see a prickly pear with a fully open blossom, and with one unopened brown bud below it. See the brown buds again in the photo below. 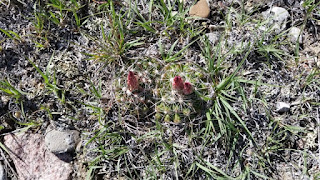 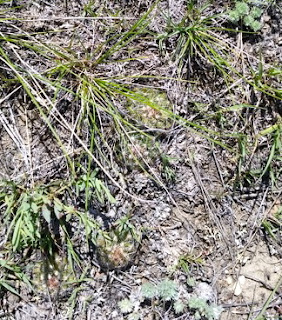 Below are some Escobaria in bloom, but I rather like this photo of unblooming cacti, despite the fact that they are the most likely to surprise an unwary walker in the coulee. They have sharp spines and will attach themselves to a hiker's clothing. 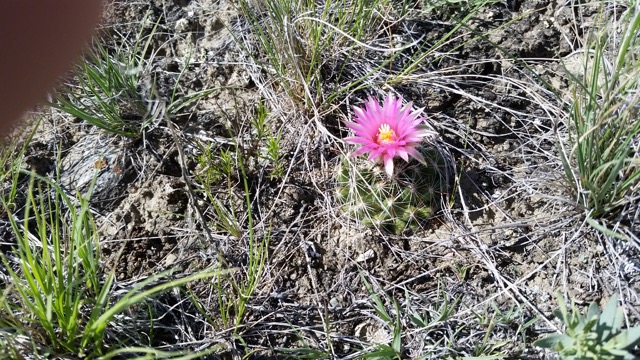 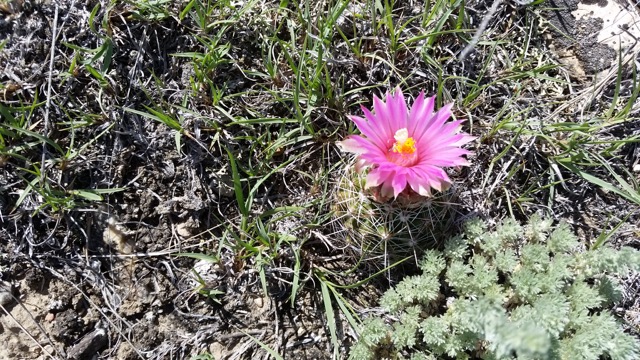 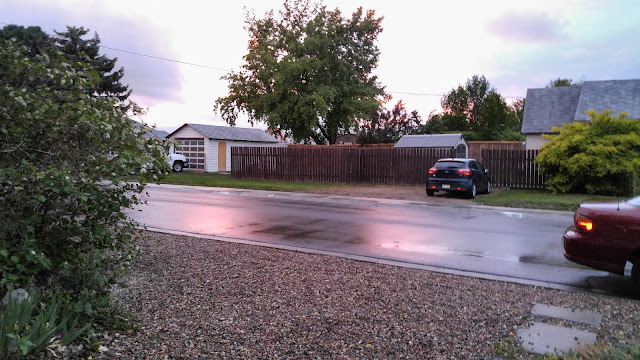 Looking northwest toward our neighbors' yard, we could see how the sunset had lit up the sky, and was reflected in our road, which was wet from a recent rain. The sunset even lit up the taillight of my car. 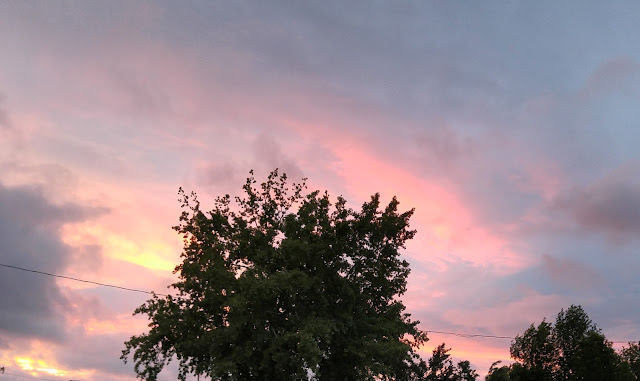 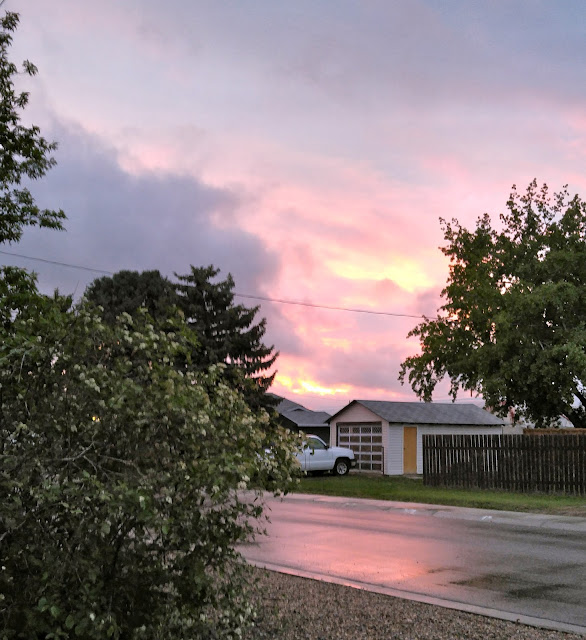 That's our snowberry bush in the left foreground of the first and third shots. It's actually on town property but I claim it as if it were ours.