Spring is sprung, the grass is riz

Time for Auntie Kay's annual photos of her perennials. Bear with me, folks, I'm at it again.
A new twist for 2018: Auntie Kay doesn't remember the names of all her trees.
No, not names like 'Mary' or 'Jim' or even 'Myrtle' — just doesn't know the genus, the species, specifics, or special features.
"Sigh," as Auntie Kay is wont to say.
It's been a great month weatherwise, not so great memorywise, so bear with me folks.
It's Spring, I gotta do it before summer starts this week!
"Merry" has been tantalizing me, and some of my long-suffering friends who have tried to help, but we can't come up with a definite identification, even after posting photos on Facebook. Sigh.
One theory has it that it might be lavender. Research shows it might not. I hope it isn't, but only because I don't remember having a lavender bush or tree, and one would think one would, especially a tree-shrub-whatever with such obviously old stems and branches?
(NB: after several blogging friends have studied the subject, it turns out that my most mysterious mystery tree is honeysuckle, even if it doesn't look exactly like my little honeysuckle bush.) 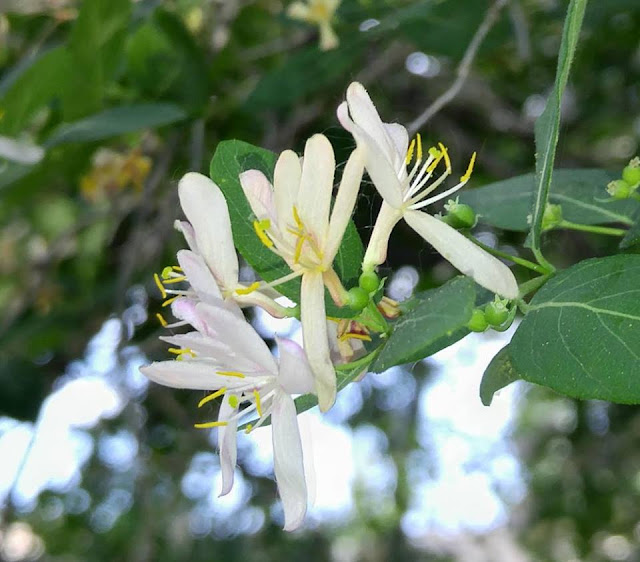 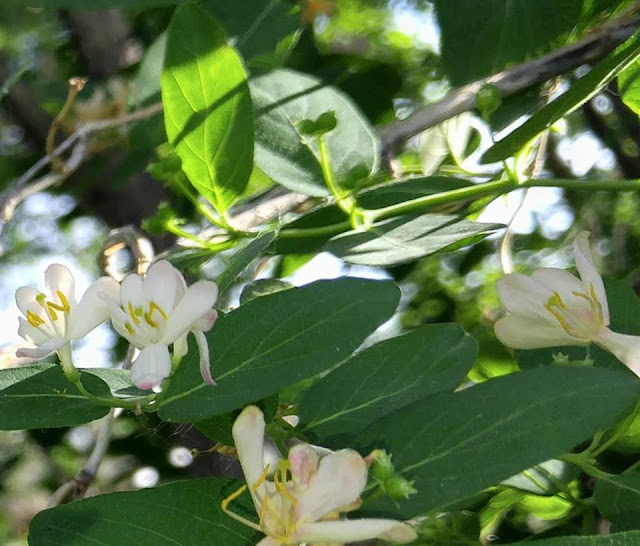 AND BELOW A CLOSEUP OF THE
ANCIENT TREE-SHRUB-BUSH THAT BORE THEM,
DEFINITELY NOT A NEW ADDITION TO THE 'GARDEN' 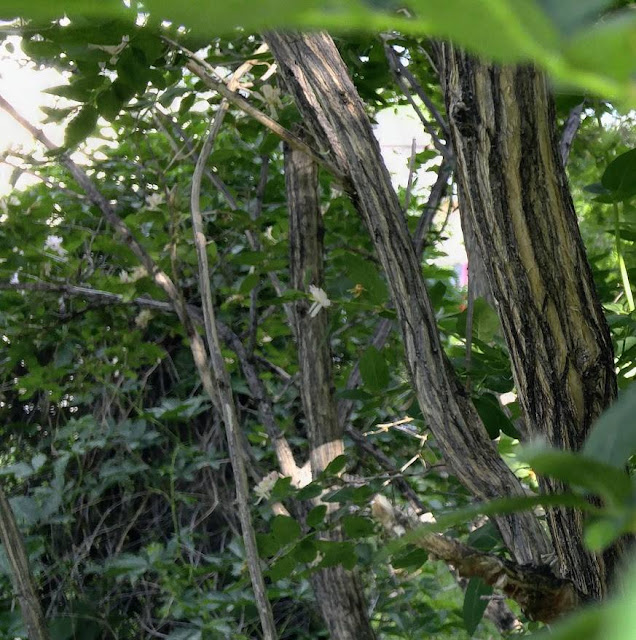 SO...back to my usuals, starting with the ubiquitous Ornamental Crabapple Tree below—
an annual favourite of mine and, I hope, yours. 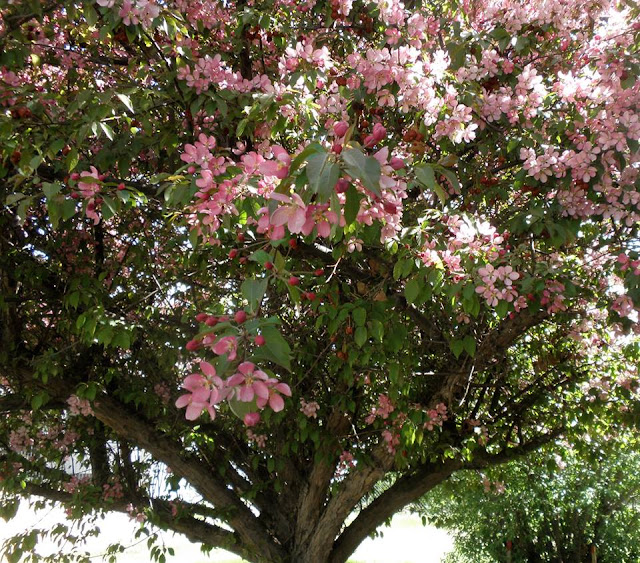 THE EVER-POPULAR HONEYSUCKLE, BELOW, OR WHAT'S LEFT OF IT 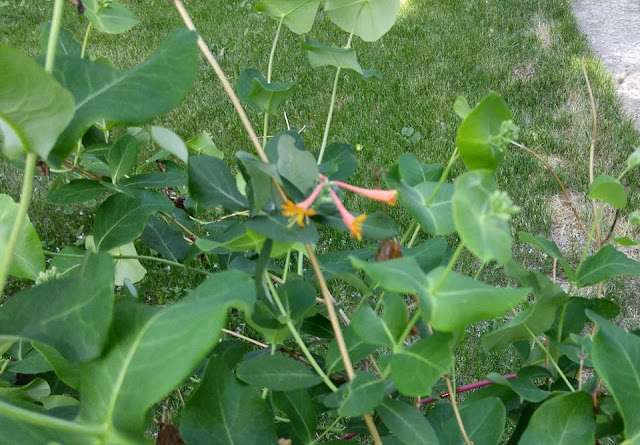 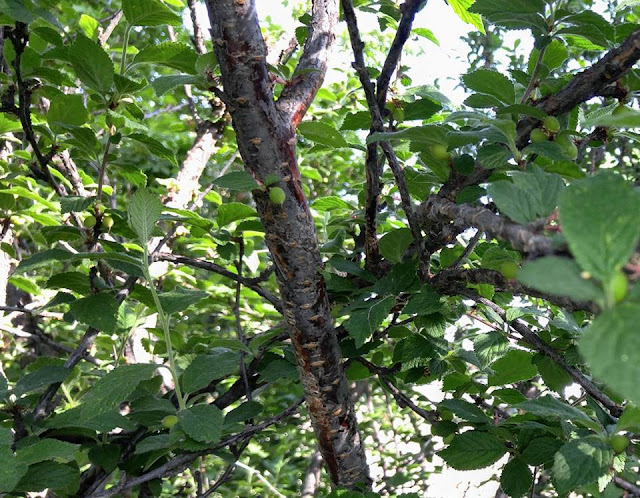 DOES ANYONE RECOGNIZE THIS TREE/SHRUB/WHATEVER
THAT VOLUNTEERED TO DROP
ITS ITTY-BITTY WHITE FLOWERS ON THE DECK?
EVEN MY BIG NEWPUSH-BROOM CAN'T SWEEP THEM UP 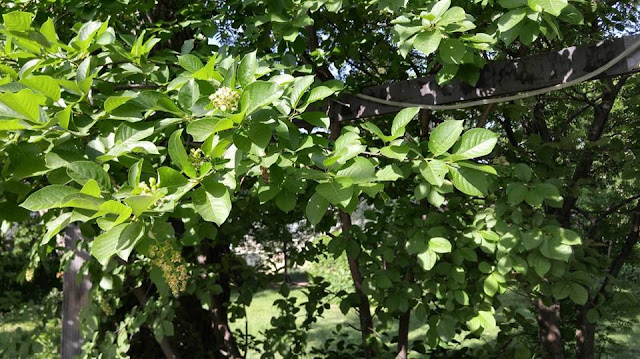 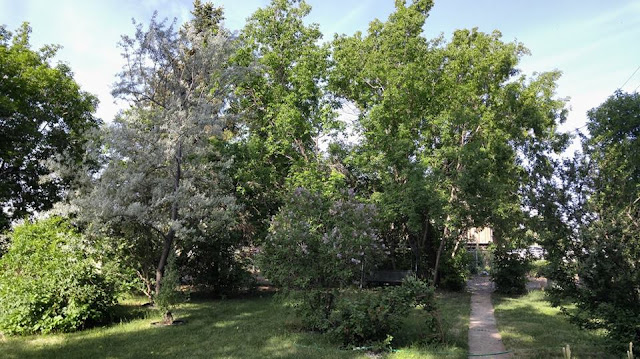 This, then, is my world
Posting for Lady Fi's wonderful
OUR WORLD TUESDAY

The beginning of the end 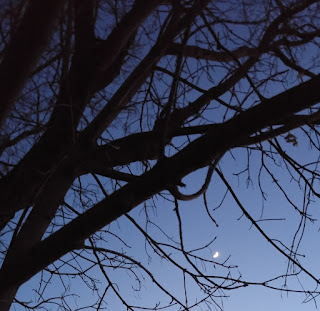 Before the 21st century had time to grow old, the planet Earth turned cold. At the same time, volcanic eruptions and ferocious, swirling storms tripled and quadrupled in frequency.


The moon, half covered with the detritus of Man's overwhelming population, could no longer be fully seen from Earth.

Most of the world's population starved, as oceans filled with plastic and could no longer support life, any more than could countless miles of trash-covered tracts which had once been profitable farms.

Sending garbage to the moon had been the brainchild of a man ruling a large, powerful country. His poorly-paid labourers gathered waste and packed it into huge rockets built for one-way travel. Overpaid scientists then sent the garbage rockets on their way.

The disposable space ships were timed to self-destruct on the face of the moon, thus spewing their garbage, all of which would then orbit the earth along with skeletons of satellites from the 20th and early 21st centuries.

Space — living space — residential space — was still at a premium on Earth. Millions of starving people crowded into tenements, shacks, and tent cities, while the wealthy sat in air-and-water-purified mansions, eating food cultivated for them (and them only) in huge greenhouses.

The book is about garbage and India, or India and garbage, whichever you prefer, but does not send the same message as do articles or books about pollution that have been published elsewhere in the world. 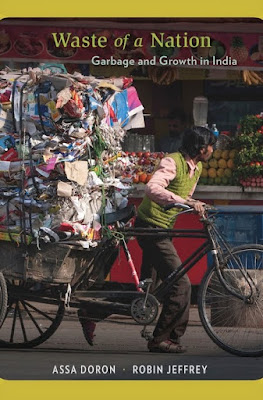 In this new book, their take on the subject of garbage is as different from mine as is India from British Columbia where Robin and I grew up, and is also as different from anywhere in Canada as is Australia where he and Doron both live.

In reading about this book, I have found that North Americans and others in this world deal with garbage in a far different way than do the people of India.

I was surprised, as I think you will be, that the big problem isn't pollution of the waters surrounding India to the west, south, and east, but rather the way in which waste has been handled for centuries compared with the impact of new technology on the people who once took care of their country's garbage.

Large-scale waste management as we now know it...with Sweden being today's model and other countries thus inspired...might become a serious problem in India rather than a solution.

The management of waste in India was handled by its specialists for centuries with no interference from scientists and their ilk. Of course, waste itself is a problem everywhere, as we all know, but solving today's pollution problem with technology might not be the end game for India.

I haven't read Waste of a Nation because it hasn't yet arrived by mail from Australia, but I have been apprised of its content by one of its authors — not only apprised but also surprised, because I have always been used to the view that so much of the world has on the subject.

We sit in our houses or apartments or condos, and we travel in our cars or trucks or camper vans or motorhomes, spewing waste gases into the atmosphere and dropping bottles, cans, papers, wrappers, and other detritus into bins or, heaven forbid, onto the roadside, some of which will be picked up by vast garbage trucks every day or week, depending on the location, and the rest of which will be left to moulder by the wayside or be eaten by animals who cannot digest it properly. Yet so many people in 'civilized' countries see ourselves as superior beings, or at least see our systems, as superior.

We've probably all been raised to believe that in waste as in everything, our way is the right way, and have only recently started to realize we could be wrong. (For recently, think 21st Century.)

It never occurs to North Americans, for instance, that a much, much older civilization might have been dealing with waste in its own way for centuries.

I look forward to reading this book by Assa Doron and Robin Jeffrey in order to learn more about those ancient practices, and how they compare with waste management in 'our world'!

OUR WORLD TUESDAY
HOSTED BY FIONA IN SWEDEN,
WHERE THEY DO KNOW BETTER


NOTE: ANONYMOUS COMMENTS WILL BE DELETED 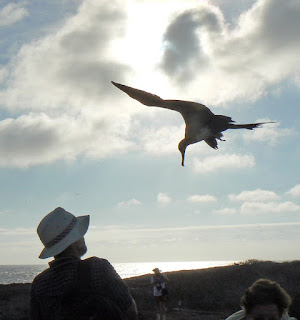 Attack of the frigate bird, Galapagos Islands. (No one was hurt in the making of this blog post.) 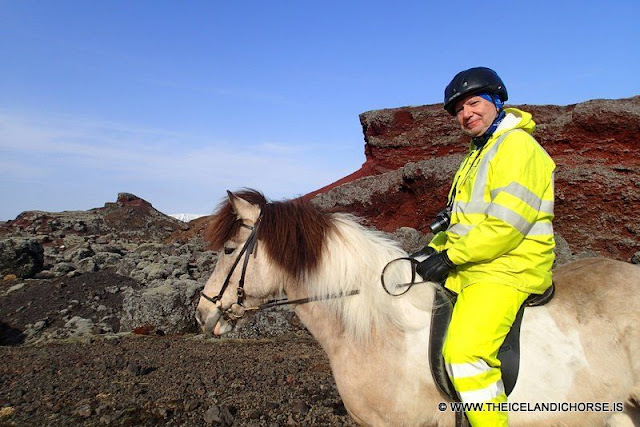 I didn't ride a horse, but I hugged (yes, hugged!) many of them.
Icelandic horses love cuddling.

And then south again...

Dick and our sister-in-law Maria in Cancun, Mexico. 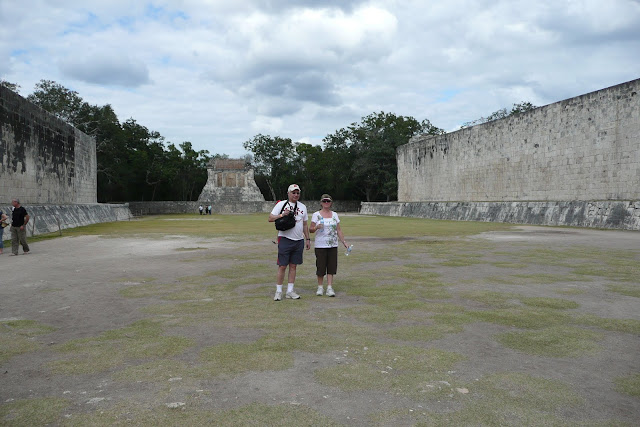 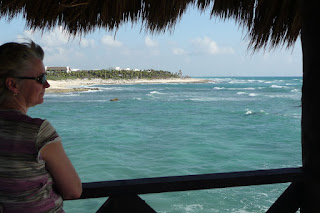 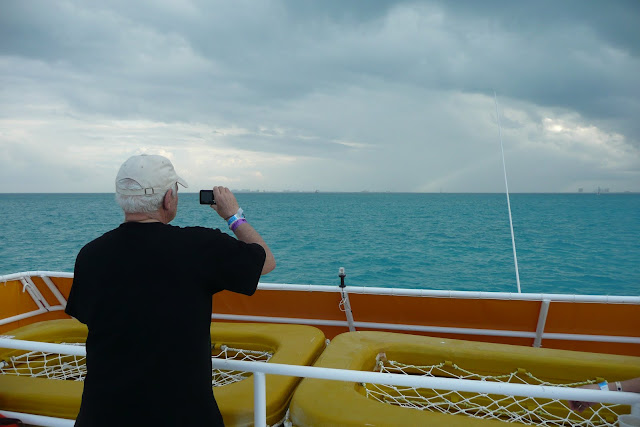 Here I am: that annoying (some might even say fear-mongering) Canadian: an anti-pollution British Columbian now living in southeastern Alberta.

So...we think death by garbage can't happen to just about every country in the world? And we think it can't kill the planet while it's at it? We are very wrong.

First, something to think about: our very own Fiona, who hosts Our World Tuesday, lives in Sweden, a country fighting every day against death by garbage...

We now know the fight is not yet lost, people, but for many of us the end might just be in sight.

For another point of view, I'll soon let you know what my friend Robin, and his co-author Assa Doron, have to say about garbage in their latest book: Waste of a Nation.

Meanwhile, here is Canada's new future in a few randomly-chosen but semi-organized links for your information and consideration. 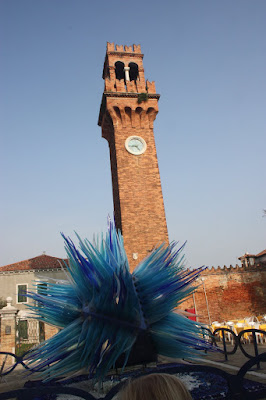 It takes a special kind of Skywatcher to shoot consistently crooked sky photos, and I am that special Skywatcher! Notice, please, that they don't all lean at the same angle, although most do have a left-leaning tendency. (This is not a political comment, however, but do feel welcome to take it as such if you choose.) 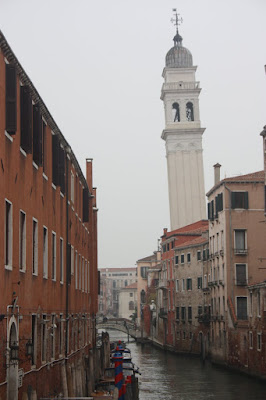 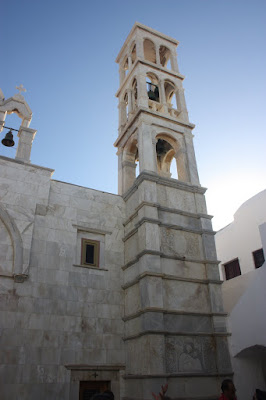 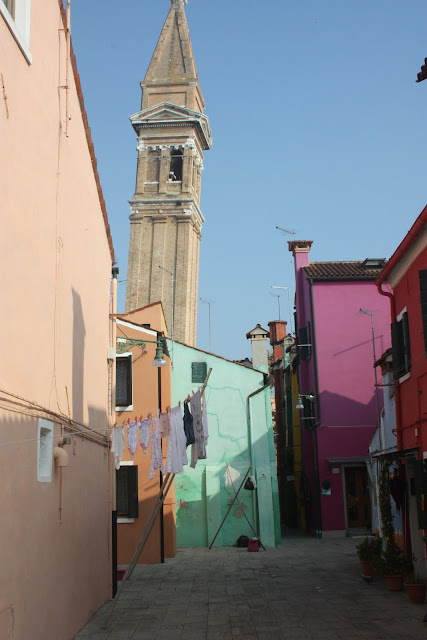 
There is a fringe where your world and mine meet, merge, meld for a month or more. Differences disappear and the common ground seems solid.

We walk on this illusory rock confidently, comfortably, tempted to take this temporary thing as truth.

The rock is a lie.

What is it in the human mind that recognizes mirages yet yearns to accept them as real? That, upon waking, refuses to recognize the death of a dream?

We're masochists all, we humans, walking wide-eyed into pain, daring it to hurt us and recoiling in surprise when it strikes.

Hand held out to stroke the head of a rabid dog; bare feet in the scorpion's lair; bare heart held in a heartless lover's hand.

NOTE: I WILL DELETE ALL ANONYMOUS COMMENTS!
Posted by Kay L. Davies at 8:38 AM 13 comments:

I posted about the subject of dinosaurs some years ago after we had taken our Golden Retriever, Lindy, to help my husband explore Dinosaur Provincial Park near the town of Patricia, Alberta.

On the world stage, Canada is often considered a small country because of our relatively sparse human population despite our large land mass. However, Canada has been the site of some very big things!

Many fossils have been found of
DINOSAURS
who once roamed this countryside!

Although not as famous as its cousin 'Rex,' Alberta's gargantuan lizard, Albertosaurus, is a genus of tyrannosaurid theropod dinosaur that lived in western North America during the late Cretaceous Period, about 70 million years ago.

The type species, Albertosaurus Sarcophagus, was restricted in range to the modern-day Canadian province of Alberta, which gives the genus its named.
Scientists, however, disagree on the content of the genus, with some of them recognizing Gorgosaurus libratus as a second species.

As a tyrannosaurid, Albertosaurus was a bipedal predator with tiny, two-fingered hands and a massive head with dozens of large, sharp teeth.
It was probably at the top of the food chain in its local ecosystem. Although relatively large for a theropod, Albertosaurus was much smaller than its more famous relative Tyrannosaurus, probably weighing less than 2 metric tons.

I've been posting so much lately about the dangers of pollution on our planet that I can't help wondering...what if we suffer the same kind of fate as the dinosaur? Would we be humanity extinctus?

Since the first discovery in 1884, fossils of more than 30 individuals have been recovered, providing scientists with a more detailed knowledge of Albertosaurus anatomy than anything available for other tyrannosaurids.

The discovery of 26 individuals at one site provides evidence of pack behaviour and allows students of ontogeny and population biology opportunities which are impossible with lesser-known dinosaurs.