"The lonely sea and the sky" 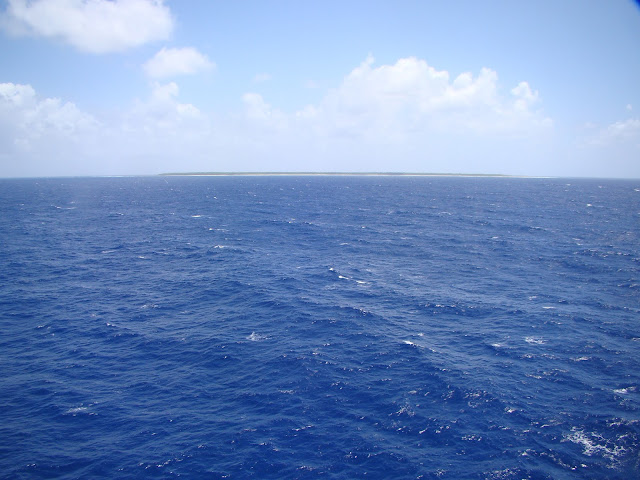 Today I'm joining Skywatch Friday with this photo of sky and sea, with the faint line of an island in between. My husband, Richard Schear, captured this picture on our South Pacific cruise in November, somewhere between French Polynesia and Hawaii. (Funny, after we left Hawaii to sail to Los Angeles, we didn't see any islands at all!)

I seem to have a theme going here... 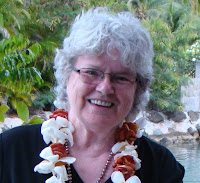 The photos below were taken on the island of Bora Bora when we visited French Polynesia in November, 2015.
The first shows the iconic overwater huts, some of which are as lavishly furnished and decorated as any first-class hotel.
I am posting them here for Our World Tuesday... 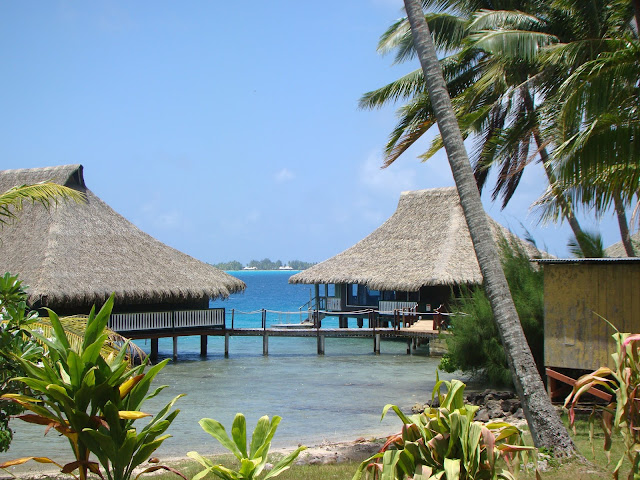 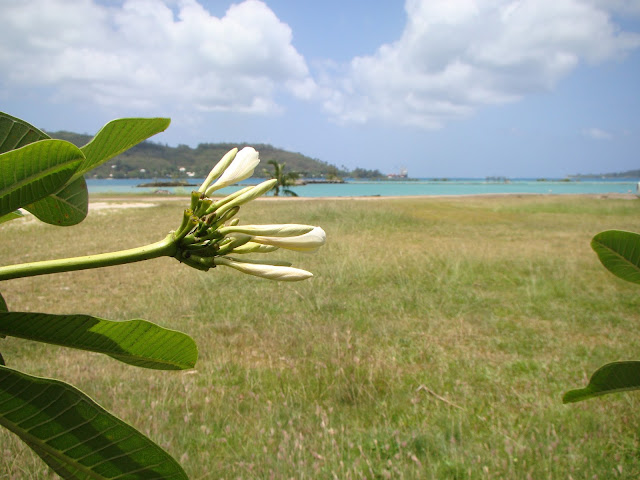 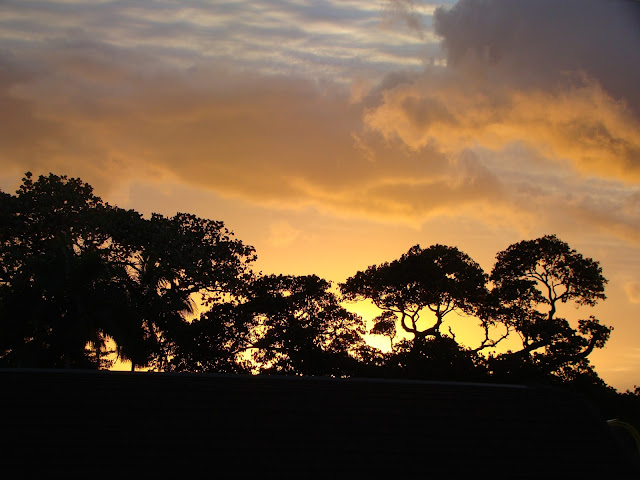 Sunset on the island of Tahiti during our visit to French Polynesia in November.
Sharing with this week's Skywatch Friday.

More Moorea for Our World Tuesday

Continuing the theme set on Skywatch Friday with this, another photo of the sky over the beautiful French Polynesian island of Moorea.
Posted for Our World Tuesday.
We visited Tahiti and Bora Bora as well as Moorea on a cruise that also took us to Hawaii before crossing the Pacific to California. It was our second transoceanic voyage...both the Atlantic and the Pacific were pond-calm for us. 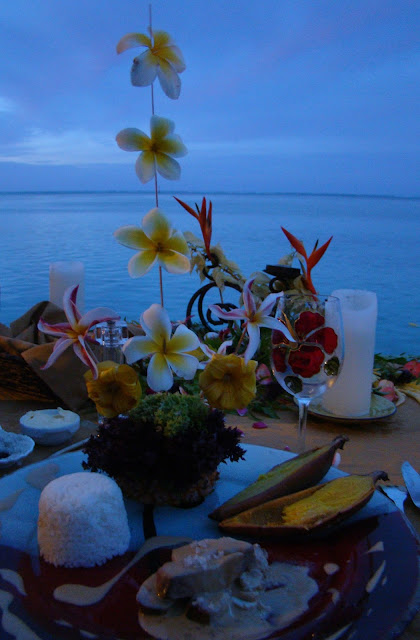 Almost always "a day late and a dollar short" I am posting these photos for the Sky Watch Friday meme at pretty much the last possible moment.
My husband took these evening photos on the island of Moorea in French Polynesia when we visited there this winter...certainly much warmer sights than the photo I posted for Our World Tuesday this week!
We pampered ourselves by staying at the Hotel Fenua Mata'i'oa on Moorea, where the owners and staff pampered us also.
Moorea is exquisite...much prettier than the island of Tahiti and, yes, prettier than Bora Bora.
— Kay 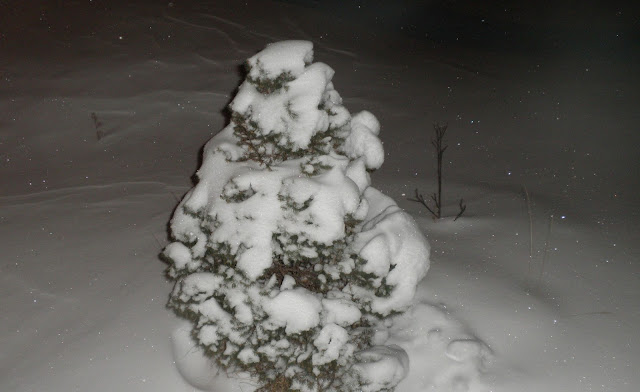 This little tree is only a few feet away from me as I sit at my desk. It's just outside the door and I love to look at it.
I hope you can see the snow sparkling around it in this photo, which I'm posting for the Our World Tuesday meme.

At the other end of the couch

For anyone who's wondering why we let our dog get away with this, the truth is: it is Lindy's couch.
We used to have our recliners at that end of the room, facing the TV, with an ottoman between us, for Lindy.
Eventually, we had to add one, two, and finally three extra pieces of furniture so that Lindy could "jump" up onto the ottoman because the truth was: she could no longer jump.
So I took it upon myself to buy Lindy's couch. I ordered it under the false impression that both ends would recline while the centre stayed stable. Yes, the centre remains stable, and both ends have foot-rests that come up after a rather tiring (for me) pull on a handle, and which go back down after an equally exhaustive pull in the opposite direction, but neither end reclines.
Dick's end, of course, operates smoothly because, well, that's life...
However, the couch is definitely Lindy's, as planned. She'll climb up onto the middle with the use of a one-step stool instead of three, and she'll rest with her head in my lap. Should I happen to get up, however, all bets are off, and I return to find her where I used to be.
Because the his-and-my recliners are at the opposite side of the room, beside the TV, I have to lift Lindy if I want to sit down, and she weighs a lot (minimum) or a ton (maximum).
But it's all worth it...all for love of the dog.
In the photo above, Lindy is sleeping at her daddy's end of the couch, the end with the lamp, and the curio cabinet for his various papers and things, and the overly-large "tv table" he uses as a desk and/or for his evening meal.
I sometimes wish I had one of those tables, too, but they're plug-ugly, so I put up with the tiny but pretty end table I have to move around to face me when we're eating in the living room, which is most of the time.
And it's all worth it...all for love of the dog.

Our Lindy sleeps a great deal, because she's a senior dog and doesn't have the energy she used to have. In fact, it's hard for my husband to get her to walk to the end of the block, and she won't walk with me at all unless I tell her we're going to the car. Then she's happy.
I took a photo of her with my new LG G4 phone/camera—my favourite subject and my first photo—but I don't know how to upload it to my computer for cropping, etc.
I'm going to try it, without any help, because my husband is refereeing basketball, but I'm not sure if it will work. So, I'm not sure if my photo for Our World Tuesday will be posted on Tuesday or on Wednesday.
***
Okay, it's Wednesday. Late Wednesday afternoon, in fact. But with some help from the Big Guy before he left for basketball again, and then some guessing on my part, we have the first photo ever imported from my LG G4 to my computer, from there to my page www.unfittie.blogspot.ca and then to Our World Tuesday.
PS — I ended up e-mailing the photo to myself. One day I'll learn how to send photos from the phone to my computer's photo program.

Happy Hogmanay, as the Scots say

It is now 2016, a leap year, so I've been told. It's quiet in my house. My husband and our darling Lindy are asleep, and I'm feeling grateful for blogging friends who have waited out my long dry spell on the 'net.


I don't know what the future holds,
but I hope it holds the chance for me to write again.

Right now, I'm thinking of all my poet/writer/photographer friends
who keep blogs and memes going
when I am unable to participate.
Thank you, all.


Here's hoping 2016 will be a productive year
for all of us...
HAPPY NEW YEAR