I've been posting a lot of pictures taken on our trip to Hawaii in December, 2010, but I thought I'd post some today to show why it took me so long to visit the lovely islands of Hawaii. I never felt the need to go there because I went to Mexico almost every winter for 25 years.
My parents and my youngest brother first visited Mexico's beautiful Baja in 1970, when Rob was two years old. They went back the next winter and took Mom's parents, to show them why they had fallen in love with the east coast of the peninsula. The following year, Mom and Dad decided they needed a place of their own in San Felipe, then a small shrimp-fishing village on the shore of the Sea of Cortez.
They drove the 1600 miles (or 1700 or 1800, depending which route they took, because they weren't fond of freeways) each way, every six months, until they just couldn't do it any more.
Therefore, San Felipe was the holiday destination of choice for me for many, many years. We watched it grow from a sleepy fishing village into a tourist town, but it never quite lost its appeal.
These photos were taken after Mom and Dad decided to stay in Canada year-round. I persuaded my husband to take me down so I could show him why I loved it so much. 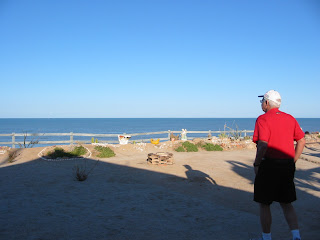 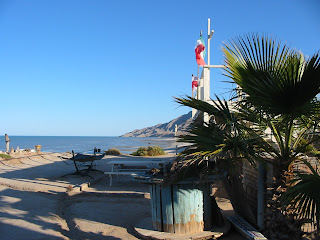 These two pictures were taken at Playa del Sol, 5 miles north of San Felipe on the Sea of Cortez. When San Felipe became too busy for my parents, they moved here, out of town. The pointed shadow that almost reaches the fence is the roof of the place Dad had built - teaching the locals the secrets of wood-frame construction, and doing much of the work himself, in the process.


There aren't many shadows in this last photo. There's not much shade in the middle of the day on the road they call "La Rumorosa" - just rock, rock, and more rock. It's a good road now, though I heard wild tales from my parents and their friends about the way it was 40 years ago.


Posted for Shadow Shot Sunday, hosted every weekend by Tracy at Hey Harriet.
To see other shadows shot by other cameras, please click
HERE!

Such an interesting collection of photos! Love the beach scene! And all garnished with beautiful shadows!

For some reason Mexico has never had any attraction for me though I know many people love to spend time there. It does look like a nice beach.

I love the shot of the photographer shooting the caballeros, and the dancing caballito (that MIGHT mean "little horse!") The last shot is a good illustration of why midday in a desert is not my favorite!

There are shadows hiding UNDER all those rocks!


IF YOU SEE A SHADOW

If you see a shadow
And want to keep it near,
Point your trusty shooter
(Make sure the lens is clear);
Press with care the shutter,
Do not slam or sock it—
Then you’ll have a photo
To carry in your pocket!

The horses on the beach is a sight I hadn't yet seen. Their shadows on the sand are great. Your father built a place of substance, as the shadows are big but lovely, leaving a place to escape from the warmth of the sun. What a lovely place for a vacation when the prairie snows and wind is upon you...

Marvelous captures as always! Love the one of the horses on the beach and the beautiful blue water!! How fun! I do love Mexico and enjoyed living there so much. Hope your weekend is going well, Kay!

Great shots! Love the first one;o)
It seems a nice place to spend the summer holidays!
Thanks for sharing;o)

Such lovely blue skies and sand and water! Great shadows as well!
You were lucky to have a place like that to got to every year. Our place was Maine when we were growing up!

My shadow shot, have a blessed Sunday!

Did you hear me gasp all the way here in new Mexico????? I used to CAMP at Playa Del Sol in my college days! I used to live in San Diego and my boyfriend and I along with many friends would head down there to camp. A lot of fun memories there, that's for sure and the BEST fish tacos I've ever had i my life. And, the tortas too.

@ Paula - That's wonderful. You're right about the fish tacos. My young sister-in-law still talks sometimes about going down to get fish tacos!
I won't tell you what the residentes (the resident foreigners) thought about American college kids, LOL. Although my parents were more than tolerant, and they loved everybody.
-- K

You're a brave soul. I'm not sure, tho I have been there a few times before and loved it, I'm not sure I'd want to go across the border these days.

Hope you're having a super Sunday!!

That's a great family story with your shadow shots, Kay, and of course I have no trouble seeing why you loved the Baja. I was scheduled to go there a few years ago, but something interrupted the plans. In the 60s, our family went to a tiny coastal town in Spain, when ice was delivered in blocks for the cooler and meat was sold by a local butcher only a few hours every morning. We had an endless, really endless, beach all to ourselves and a small paella hut. When I went back some years ago, I was shocked... the town was now dwarfed by HUGE condo buildings and the beach was an anthill of sunbathers. It was my lesson that you can't go back.

Lovely photos, and memories you have.

This looks like New Zealand, they shot a wedding TV reality show. The poor bride fell of her horse.

These are lovely photos. Thanks for sharing.

All the best, Boonie