Imagism comes to the Imaginary Garden.

In the Imaginary Garden with Real Toads, Kerry introduced us to the Imagism school of poetry this weekend, with some words of William Carlos Williams from his poem The Widow's Lament in Springtime.
Imagists were early modernist poets at the beginning of the 20th century who rejected the flowery style of the Victorian era. They included Williams, as mentioned above, as well as T.E. Hulme, James Joyce, Ezra Pound, Amy Lowell, Richard Aldington, Hilda Doolittle (published as H.D.), John Gould Fletcher, F.S. Flint, and D.H. Lawrence.
They believed words should invoke an image, and that a poet should reject unnecessary words as superfluous.
In the 1915 anthology Some Imagist Poets, Aldington wrote a stirring piece called Childhood, saying, in part:

I've seen people put
A chrysalis in a match-box,
"To see," they told me, "what sort of moth would come."
But when it broke its shell
It slipped and stumbled and fell about its prison
And tried to climb to the light
For space to dry its wings. 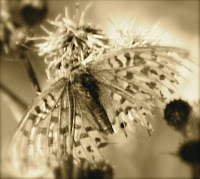 That's how I was.
Somebody found my chrysalis
And shut it in a match-box.
My shrivelled wings were beaten,
Shed their colours in dusty scales
Before the box was opened
For the moth to fly.

That's why I'll never have a child,
Never shut up a chrysalis in a match-box
For the moth to spoil and crush its bright colours,
Beating its wings against the dingy prison-wall.

I can never hope to conjure such an image with my limited skill, but I found I could relate to poems by D.H. Lawrence published in the same anthology.

Although Imagists are said to have rejected rhyme, Lawrence did not, and it is his example which I attempted to follow here, although I fully admit to being incapable of identifying unnecessary or superfluous words in my own work.

Harsh lightning comes with summer storm
Hits the one tree in the field
Tree dies with fruit that is still warm
With sun’s heat. No crop to yield.

Hired man continues his work
Hoping to locate a well
Where an underground spring might lurk,
Knowing rain was just a spell.

Rain ceases quickly as it starts.
Will a well be dug today?
The dowser uses all his arts
Summer rain’s never here to stay.

Wow Kay both these poems paint the fragile moments of life~ The things we should have-a childhood and water.
Both precious!!

The first one is well done and sad~
The second one makes me see the scene so well and now I am craving water~ Bravo Kay!

What an informative and well put-together post. Love the photos and the Childhood poem you shared. Your own poem is wonderfully imaginative and imagist! :)

Hari OM
That works!! I especially adore the phrase "..tree dies with fruit that is still warm with sun's heat - no crop to yield" Heart-rending. YAM xx

I think you captured the Imagist style very well. I must admit I'd never heard of Imagist poets before I read your post. That's one of the things I most enjoy about blogging - discovery :-)

What a wonderful post, Kay. The poem you shared was such a gift to me this Sunday morning - so important to remember not to shut children up like chrysalises in matchboxes.

You own poem is wonderful too. I like the word 'dowser' and you have brought your character to life with sparse descriptions and well-chosen words.

Kay, thanks for sharing the piece about Childhood, very moving ~ I also like the fleeting sounds and imagery of summer rain ~

At first I read with the idea of "dousing" but soon put it back to "dowsing"--you corrected my ignorance within the poem. Second read allowed me to appreciate the image of dowsing in the rains if it were a ritual cycle for the ground to yield and remember what the sky merely hint at. Beautifully complete.

Kay, what a strong piece you have written. Such a simple observation:

"Tree dies with fruit that is still warm
With sun’s heat."

you have turned masterfully into an indication of much greater problems. ("No crop to yield.) And yet, I'm left holding that warm fruit and mourning the loss of the tree.

There is so much to read between the lines here. Masterful job!

These are just wonderful, Kay. Thank you. k.

Kay, nice observation, very well written about dying tree and fruit, summer rain and the thoughts about well. Thanks for sharing childhood poem, important lesson to let kids the freedom to express themselves. Thanks for sharing!
Great contribution!