Magpie Tales 65, of saints and politicians


Saint Francis of Assisi (1182-1226) is best known as the patron saint of animals. He is also, however, the patron saint of the environment, which seems more than appropriate to me, because, undoubtedly, the fate of animals is inextricably linked to the fate of Earth's environment.
He is well known as the founder of the Franciscan Order of monks, and less well known for founding the Order of Poor Ladies, an order for poor women. I imagine he did this because he knew so many old, poor women were unable to fend for themselves in the beginning of the 13th century, and the security of a religious order would give them not only a home, but also a caring family.

I wonder how he might feel about the poor and elderly in the world today. Would he perhaps have become a politician instead of a monk, in order to seek legislation to provide for them? I am certain he would have felt the need to do something, somehow. From what I little I have read of him, I can be sure he wasn't a man to do nothing.

He also organized the first Christmas nativity scene, a live scene made up of people and animals to represent the birth of Jesus. Little did he know this would lead to countless carved, sculpted, painted, wood, porcelain, ceramic, glass and metal nativity scenes in all the years to come.

I'm sure he would love all the Sunday School Christmas pageants performed these days, but how would he feel about animal-rights organizations objecting to the mistreatment of animals used in live nativity scenes?

Early in the 20th century, a prayer, written by an unknown poet, became immensely popular and was attributed to Saint Francis because it is thought to embody the frame of mind which led to his canonization by the Catholic church.

There are more copies of this prayer hanging on walls in homes Catholic and non-Catholic, than there are nativity scenes and Sunday School pageants combined. Popular hymns have been sung using its words, and popular singers have recorded it. http://www.youtube.com/watch?v=dGyOtU3Es_s&feature=related

While not a Catholic myself, I have always been fond of St. Francis, because of the animals and birds, and because of his tolerance and love for the poor, the overlooked, and the downtrodden. Wikipedia quotes several versions of "The Prayer of St. Francis" and the following (which I copied from Wikipedia but use here somewhat incompletely, in the spirt of inclusiveness) is from chapter 11 of the book Alcoholics Anonymous. I am almost certain Saint Francis would, if he knew of either the prayer or the book, approve of its use therein. I believe he might even enjoy being, unofficially and very, very informally, the patron saint, as it were, of alcoholics.

Make me a channel of thy peace;
that where there is hatred, I may bring love; 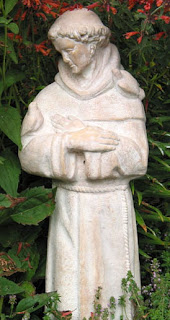 St Francis was one of the good guys, that's for sure! (I don't necessarily think that all the Saints were ;>)...

An excellent post, Kay! As always, you've posed a few pivotal questions and given us much to think about. The dichotomy of organized religion strikes me as curious...in spite of the evil so often perpetrated in the name of religion, there are countless other examples of the love and compassion we would wish for every living being. Perhaps one of these days humankind will tip the balance way over into the positive side...:)

I love the Prayer of Saint Francis. And I'm not alone, because it is recited at many funerals I have attended. He inspired and helped many. The world always has and continues to need saintly people like him.

Would that more professed Christians lived by these precepts.

Yeah, I'm a bit of a cynic regarding saints. It isn't the saint i admire, but the man.

very nice...lots to chew on here...i think the man is worth some revere, but...religeon for the sake of religeon is dead...

I ponder your words and appreciate them but I'm not sure they have meaning in this modern world. Thank you, though, for expressing them.

I've always loved his philosophy and humanity. The quote I most remember is "If you have men who will exclude any of God's creatures from the shelter of compassion and pity, you will have men who deal likewise with their fellow men." Just as true today as when he wrote it and perhaps that is some of his appeal - he speaks of universal truths.

I am Catholic and while I think some of the saints in the church would more thasn likely be locked up in a mental ward these days, those like St Francis would be shining lights in the world. A person like the Dalai Lama - loved by the people but loathed by those who want to oppress those very same people.

I'm not Catholic either, but I really admire St. Francis too.

It's a prayer even a non-believer could adopt. Unfortunately, one of my most disliked politicians adopted it for herself, the one who sowed most discord in the UK.

I read up a bit on the saint, but then decided that the religious aspects of the prompt is best left to those who know what to do with it, like you, here.

Thanks for the information.
it is reflective and helpful for those who are not familiar with him.

I think his story resonates with us because of his humanitarianism. If he came back, he would probably work for a world charity, definitely not a politician.

The last line says it all...