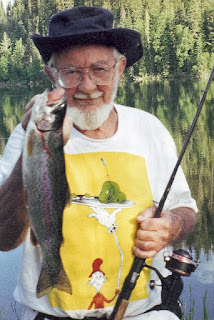 While writing about my father, I felt I must look up some things that have already been written about him, and I've included some of them here.

Outdoor and travel writer, photographer, artist, musician, WWII veteran, and journeyman printer, Gordon Davies (1924–2009) was 'the friend of every river he ever met'.


With my mother, Pauline—and very often with their young son, my brother Rob—my parents explored and fished rivers from Yukon to Mexico.

In his Living Rivers books, 'he showed, in prose and photographs, how deeply he felt about the streams of British Columbia', our home province.

'Well-informed, concerned, caring, and with a wry wit, he leaves us in no doubt: he loved rivers.'

The second volume in Gordon Davies' collection of stories also featured the rivers of the Yukon. From the turbulent Yukon in the far north, to streams flowing into Washington State, he became, in his books, 'a valuable and entertaining guide to fisher and non-fisher alike'.

'An avid fisher could find information about various fish in each river, as well as suggestions as to the best lures and bait. Those who didn't fish could find a wealth of material about western Canadian rivers, and about interesting sites along their banks.'

Lots of good, even wonderful, things have been said about my dad (whom I often referred to as 'my illustrious ancestor') and I feel in my heart that I should add something here, but right now I can only quote this verse from 'Voices United'—

NEW NEWS — I have successfully tracked down copies of Dad's books, have ordered some from Amazon, etc., and now am in touch with the publisher of Living Rivers II, about procuring more copies for posterity, and for the nieces, nephews, grandchildren et al.

Lovely tribute and that's wonderful news that you've found his book. I am so glad.

What a special treat these books will be for the now and then relatives.
I adore your home province of British Columbia - in particular Vancouver Island, where I've been blessed to experience 3 house-sits over the past 3 years (and another long-term sit lined up for your next Summer :-)).
Your father's love of BC's rivers I can fully understand - the abundance of pristine waters sure left an impression on me (I live in the driest State of Australia!). Thank you for dropping by my blog Kay.

So glad you could track down your dad's books!

Hari Om
Exactly a year ago, Kay, we shared time together here in the Bonny Land, and I heard from your very lips the love and adoration for you Illustrious Ancestor!!! How wonderful that you have been able to obtain some copies for your family... YAM xx

Good news then Kay. Those copies of Dad's books will surely fill some gaps for your family. Best from Sue and me in England.

How awesome to have your father, for one, since he seemed to be such a colorful soul and full of life, and have his books as well. Love the quote. You're musician in the man reminds me of my husband's parents...they always went to the dances back in the day, and through them, I got to know big bands and love them.

I was happy to see your visit to my Pictorial Tuesday and loved the story of your hubby and the furbabies. Thanks so much for commenting. :)

What a great feeling you must have when you read your dad's books. Lovely tribute to him.

Nice post. Good that you could get some more copies of the book.

It's important to look back over a life!

It's been interesting learning more about your family. - Margy