CHAPTER 2 — FROM THE AUTHOR

This is a true story. It more or less has a beginning and an end, but it isn’t a novel and it doesn’t have a plot. It happened to me. The ‘I’ in the book is me, Kay Davies, a former workaholic and now a government-registered unfittie; the ‘he’ in the book is my husband Richard Schear, a senior who can still run fast enough to referee high school basketball and football.
Being away from home isn’t a new idea to me. My parents spent some 25 winters in Mexico’s Baja Peninsula, as well as many summers traveling and camping while my father gathered material and took thousands of 35mm color transparencies for his books about the rivers of British Columbia.
So travel isn’t new to me, either. When I was younger, I thought nothing of flying from the west coast of Canada to the east coast of the US for a long weekend, or catching a flight to southern California to rent a car and pop down the Baja to visit my parents for a week. I once took a year off to play rather than work, and during that year I took my brother to Australia for a month.
But the time came when it all stopped. Not just running foot races with my youngest brother. That went first, of course, because he got faster as I got slower. But my pick-up-and-take-off lifestyle eventually stopped, too.
I didn’t relinquish my wanderlust willingly, but relinquish it I finally did, because I could no longer work. I could no longer guarantee I’d show up on the job every day, or produce any significant amount of work once I got there. When I was thoroughly beaten down, the government ended up giving me money every month to make up for my general uselessness and lack of reliability.

KAY’S COLLECTION OF ILLNESSES
For a while (for too long, in fact) I fought my fate. I denied it even as I railed against it, and refused to apply for a pension until several different pains and problems in various parts of my body had me pretty much licked. I tried to work, but couldn’t, so I had to sell my house and live on the proceeds. Then I gave up, applied to the feds, and had to wait for my application to be approved. I moved myself and my two cats to a drier climate, but the medication prescribed for one illness had caused more damage to my already beleaguered body. My eyes developed cataracts, my blood sugar went wonky, my bones got terrifyingly thin, and I got fat. I swelled up like a balloon, and I’ve never lost that steroid weight.
I did, however, lose my looks. Sometimes I still wonder which I miss most, a successful career in the newspaper and printing industry, or a pretty face and a slim body.
It’s a tough call. 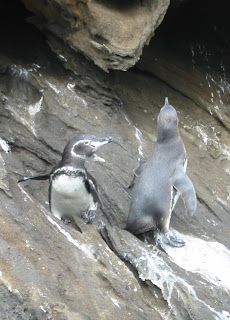 Newspaper compositors are being replaced by computers every day, and on the other hand, it doesn’t much matter if old ladies aren’t pretty. Dick thinks I’m cute, which is probably why I married him. However, it is a compliment about which I’m ambivalent. Most of the time, I am glad he thinks so, until I remember I’m a cute old lady, not a cute young thing. Sigh.
So, where was I? Ah, yes, I relinquished my lifestyle, moved away from the wet west coast, and some years later settled into semi-domesticity (I’m no one’s idea of a housewife) out here on the prairie, where the deer and the antelope play. I could book a seat-sale flight, or Dick would drive me out to BC to check on my elderly parents a couple of times a year. I’d see other members of the family, visit a few old friends, get some good fish and chips, and it was enough. I was content.
“There are penguins in the Galapagos Islands,” said Dick.
We’ve been traveling ever since.
Posted by Kay L. Davies at 11:36 PM

Kay, I just googled Kay D and unfittie and found your blog. I think that raises you from infamous to famous.

Well, one of those words is pretty specific to me, but it's still nice to get Googled and found.
Thanks.
Love, K

Well, I see what you mean, Kay... it's not fun to have a chronic illness that changes your life. Is it fibromyalgia, or something like that, long term debilitating? (You don't have to tell me, of course, I'm fine with that.) I have several good friends who seem to be in a similar boat as you, as well as a couple of young nieces with systemic lupus, and for all of them it's a daily struggle, feeling better some days, weeks, then dipping down... They too have learned to "manage" the pains and make the most of things. Wishing you wellness.

Francisca, you're right. Fibromyalgia for years before I let it force me out of work, only when the stress (I think) brought on ulcerative colitis as well.
Then the medication (a cortico-steroid) for the colitis caused osteoporosis, massive weight gain, cataracts and...etc.
Dreadful, though, your young nieces with lupus, but so glad they have learned to make the most of things. It's the only way, and it's what "An Unfittie's Guide" is meant to convey.

That's a real bummer, Kay. I'm learning about FM from my friend who has also struggled with it for decades. I can only wish you both plenty of courage and many more good days. (I generally subscribe to my comments on other people's posts if I write anything substantive or ask a question.)

Hi Kay, I am learning more about you...now continue with my read...

I can so empathize with this piece, Kay,
especially on days like this when my CFS/fibromyalgia tries its best to cripple me completely! I haven't heard back about my application, so may yet have to return to my stressful job...yuk.

It's clear that your spirit hasn't been compromised! You're one of the kindest, most optimistic people I know, and your blog is always a great place to visit.
I'm enjoying reading your story, so am moving on to the next chapter now...:)