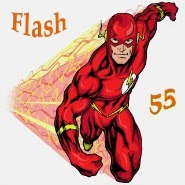 the open road
the long and very winding road
on your bike—
a biker’s bike—
so nevermore will you hitchhike
on your way
because today
you’ll know why the bikers say
gotta go
you gotta go
oh yeah, now, man, you gotta go...
the sky...the sun...the wind...the open road
55 words by Kay Davies, Jan. 3, 2015

I never wrote for Flash 55 when it was the purview of Galen Haynes, aka G-Man, aka Mr. Knowitall, clearly the man to be reckoned with if anyone exceeded his number count for this popular monthly challenge.
I was saddened, however, when many of my blogging friends expressed their grief for his death last month. I wish I had written for Flash 55, and wish I had come to know Galen in that special interpretation of the word know which only other bloggers can understand.
Kerry says that when Galen knew he had to retire from blogging, he turned the reins and the rights to Flash 55 over to The Imaginary Garden with Real Toads,
once a place where I had my own toadstool, and a place I am happy to visit whenever I can.
Today is the first Saturday of the month, and time for the Flash 55 challenge. Kerry added a new element to the prompt for the first Saturday of the year: a photo of a biker and his motorcycle, and she wrote "During the 50s in America,  a sub-culture emerged, depicting bikers as heroes who had cast off the shackles of a society they could not come to terms with. In fact the motorcycle and rider became symbolic of a rebellion against a system that the young rejected. This was manifest in the popular slogan 'Man, you gotta go' which expressed an inexplicable urge to be in motion for motion’s sake, rather than for some articulate reason – such as a destination."
I remember the 50s, when I was very young and thought motorcycles an extremely scary mode of transportation. When I was a little older, in the 60s, I realized my poor sense of balance probably had something to do with my opinion, and I've never, therefore, ridden a motorcycle nor even been a passenger on one. Nevertheless, I think I understand that 'inexplicable urge' Kerry mentions, 'to be in motion for motion's sake' and I've written 55 words about it here.

Charlie and I used to ride his motorcycle. You have captured the feeling of it, especially in the ending. So glad to see your writing again!

I love it, Kay. The only time I rode a motorized two wheel vehicle, I was 14, it was a snowy evening and my friend's big brother, crush material, offered to drive me home on his Honda......cool until we wiped out at a stop sign and both tumbled off. We got up, averting our eyes, climbed back on and I got home without further mishap. Here in Port, once a year hundreds of bikers from all over thew Island converge upon our town, riding in vast numbers down the main street, their cycles heaped with stuffed toys for children's hospital - the annual toy run, which shows their big hearts. One year, my daughter rode on the back of one, dressed appropriately in black leather - she knows her costumes!

Oh Kay, those 55 words are written for me and Grant! Sad about the death of Galen Haynes, but glad that Kerry took over his Flash 55. Hope you, Dick and Lindy are keeping well. (((Hugs))) Jo

I'm no good a poetry. Wayne used to write poems for me, but some things fade over time. - Margy

I would surely rather have my own bike (which I would have to learn to ride) than to hitchhike. When I was young and stupid, I had a rather scary experience while hitchhiking. Wouldn't want a repeat!
I liked your poem--great rhythm and care of the subject matter. :-)
http://sphereofmusic.blogspot.com/2015/01/outfoxing-quixote-flash-55-extra.html

This is the feeling I expect from a motorcycle.. A feeling of riding and feeling free. I have been traveling on bicycle with packs, and I think that you have imagined the feeling well,. Great piece ;-)

Becoming close to the mighty elements of nature is what motorbike riding is all about - so my son tells me. He is a motorbike rider. He is just not overly fond of the life splatters on his helmet visor. A lively poem.

i liked how this built up to a climax

You nailed it, Kay!

Good to see you at the Pond again, Kay--you would have liked Galen a lot.

Hey Kay, for someone not familiar with bikes, you've done a super good job-- there is certainly a strong sense of wind and power. Thanks. K.

I don't remember the 50s, but i do remember my mother worrying herself over my middle brother wanting a motorcycle. In the end, he never got one; our mother knew how to wear us down.

Yep- you captured it- his love.

This was great! Galen would have welcomed you into his Friday funfest. He did indeed come down hard on those who exceeded his word count. I always wondered how he managed the time to do that plus give every entry a personalized witty comment. I'm glad the toads took up the mantle. Now I gotta go!

Galen was a good man, and always quick with support and irreverence. You've caught the sense well, Kay. Good to see you, and happy new year :) ~

The hubster and I have often talked of getting a bike, but it never happened. My nephews ride, and one of them used to do competitive racing. They tell me there is nothing like it.

My brother told a very funny motorcyle story at dad's funeral. Too long to tell here, but they didn't know he had one and he turned up unexpectedly. Following him home to the house. Fun topic for stories!